Release Day is finally here!  And what a special release day it is, because I have two books releasing today.  :-) 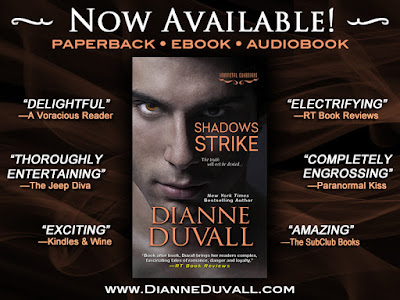 "Fans of terrific paranormal romance have hit the jackpot with Duvall and her electrifying series."
—RT Book Reviews


U.S. law enforcement agent Heather Lane can read minds. But not the future. The dream of battle and blood that recurs every night must be a fluke, some obscure terror from her own mind. What its significance might be, she can’t guess: an attack from seven psychotic vampires at once, only separated from nightmare by an eighth very different immortal. A handsome, brave man fighting at her side, a man she misses when she wakes.

Then the dream comes true. Heather is flung into a war between predators and protectors of humanity, the man from her dreams beside her again. Except now that she’s awake, she isn’t sure she can trust Ethan, or the shadow organization he represents. The U.S. military doesn’t trust either of them. But against an onslaught of evil like the one that’s coming, it will take everything they have just to survive...
— • — • — • — • — • — • — • — • — • — • — • — 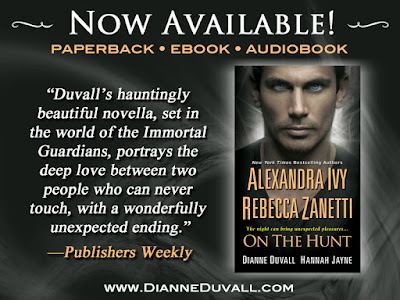 "Duvall's hauntingly beautiful novella, set in the world of the Immortal Guardians, portrays the deep love between two people who can never touch, with a wonderfully unexpected ending."
—Publishers Weekly


Four of today’s most intriguing paranormal authors entice readers deep into the shadows, where vampires, immortals, and other supernatural creatures heat up the night...

On The Hunt by Alexandra Ivy

Mika Tanner has loved Bailey Morrell, a beautiful Healer, since childhood. But his duty as a Sentinel, a supernatural guardian of an ancient race, clashed with her rebellious spirit. Now a dangerous new anarchist group not only threatens life as they know it—but any chance of their being together again...

With a deadly disease spreading like wildfire across the country, microbiologist Nora Medina needs to focus all her energy on stopping the pandemic. Playing with dynamite—in the form of her way-too-hot ex—is the last thing she should be doing. But forced to work with Deacan McDougall against unexpected enemies with the seconds ticking by, she knows the explosion is coming...

Immortal Yuri Sokolov was born with the ability to see spirits, yet he's never seen one as lovely as Cat Seddon, the woman who haunts his home and his dreams. But amid their star-crossed love, a new danger may have Yuri facing a different kind of eternity.

Stake Out by Hannah Jayne

Vampire fashion designer Nina LaShay has a lot on her plate—just two days until fashion week and the model who was flirting with her photographer boyfriend is now a corpse in her studio. But when dead turns into undead and dangerous, Nina must find out who’s responsible…before the beautiful baby vamp takes too many bites out of the Big Apple.
— • — • — • — • — • — • — • — • — • — • — • —

As usual, I'll be celebrating the release with giveaways.  I've already launched one today on My Facebook Page.  The prize:  a $15 Amazon Gift Card.

And, of course, there are cool prizes and fun posts in my Shadows Strike Blog Tour.  :-)

I hope you'll enjoy the latest installments in my Immortal Guardians series!  And, if you're new to the series, SHADOWS STRIKE can be read as a stand-alone novel.  You'll just be more familiar with the secondary characters' backgrounds if you read them in order.

Happy reading!  And have a fantastic week!

Posted by Dianne Duvall at 7:52 AM