Happy Friday!  I hope you had a good week and stayed safe and warm in the crazy weather!  I was a little disappointed because we were originally told  to expect up to five inches of snow here and ended up getting bupkis.  But at least the temperatures dropped for a couple of days.  :-)

Look what arrived in the mail!  I received my author copies of Verfluchte Seelen, the German translation of Phantom Shadows, Immortal Guardians Book 3!  Woohoo! 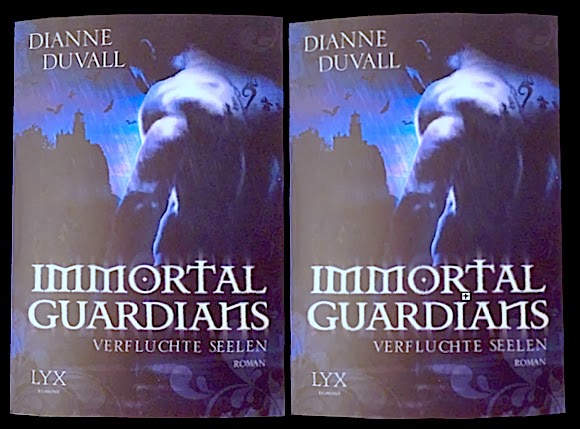 I love the German translations, because the paperbacks are so similar to hardbacks.  They're larger than most paperbacks here in the U.S.  And inside, both the front and back covers open out to reveal a larger image of the cover. 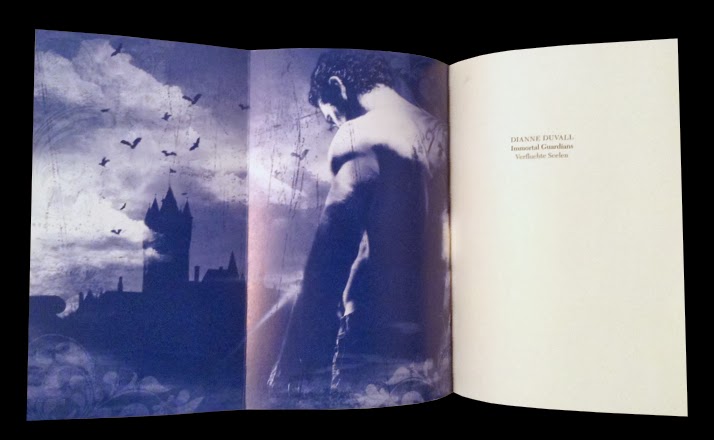 They're also the only books that include my author pic.  ;-) 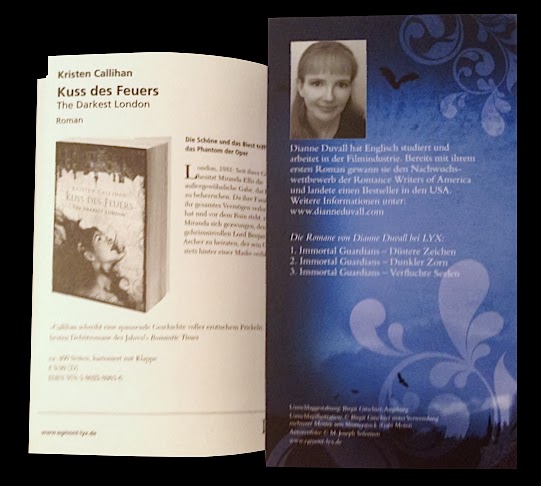 Even though I hate having my picture taken, it's still nice to have it included.  :-) 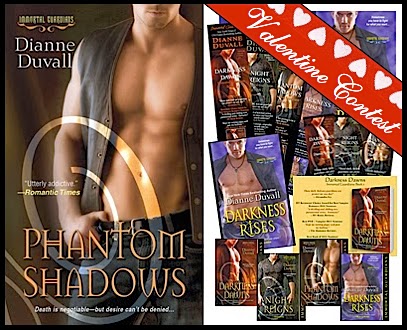 There is still a little over a week left to enter my Valentine's Contest over at Fresh Fiction!  The prize is a signed copy of Phantom Shadows + lots of Immortal Guardians swag.  If you like bad boys, then you won't want to miss this one.  :-)  You can enter HERE. 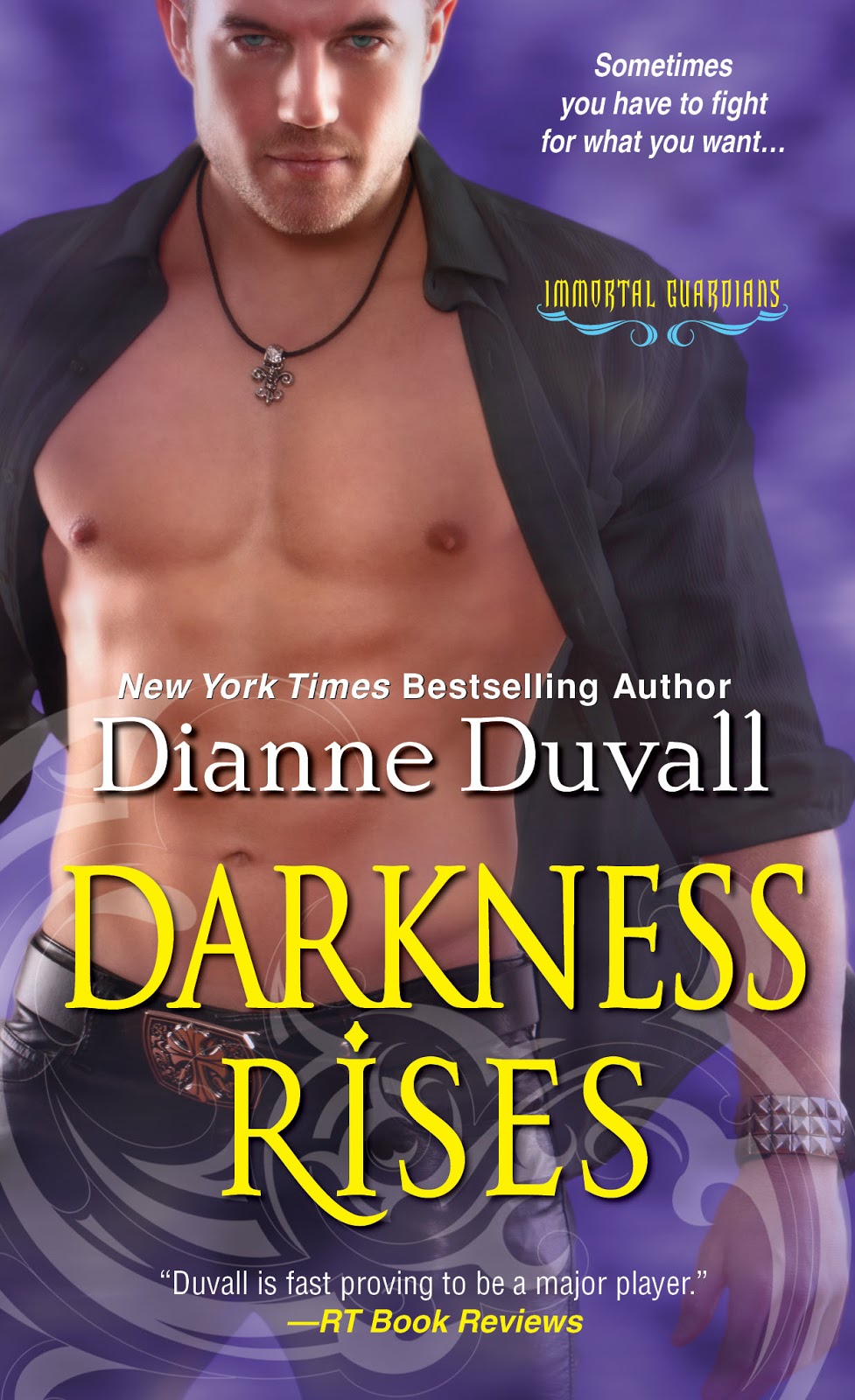 It's time once more for Favorite Quote Friday!  For today's selection, I've chosen a narrative quote from my latest release, Darkness Rises (Immortal Guardians Book 4) that describes the hero, Étienne, as he battles vampires:


His swords swung like the blades of a propeller, cutting through the vampires as though they were no more than air.

Action scenes are so much fun to write!  :-)

Posted by Dianne Duvall at 4:10 AM No comments:

Happy Friday!  We had the best weather last night.  Cold.  Wet.  Dreary.  It may sound crazy, but since we have swelteringly hot, drought-ridden, blindingly bright weather for most of the year, it was a very nice change.  :-)

And cold, wet, dreary weather is perfect for curling up with a good book while toasting one's toes before a fire.  ;-) 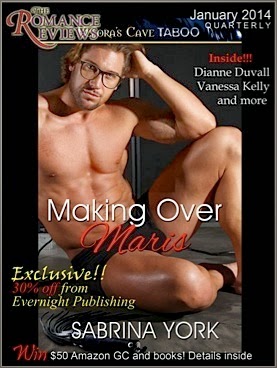 My Article "Characters:  Sometimes They Surprise You" appeared in the January 2014 issue of The Romance Reviews.  Check it out on page 28 and see how characters Bastien, Ami, and Zach changed the story arc of my Immortal Guardians series.  :-) 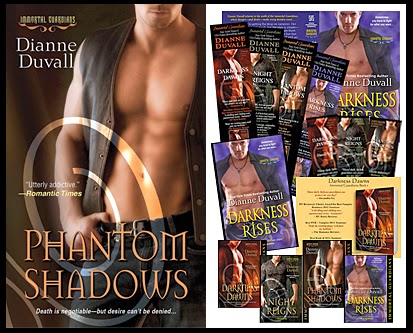 Love bad boys?  Can't resist a black sheep?  Then you're in luck, because I'm giving away a signed copy of Phantom Shadows + Immoral Guardians swag in my Valentine's Contest!  If you're new to my series, I'll give you a little teaser by saying that Bastien entered it as a villain.  He didn't just buck the system, he tried to bring it down and took being a bad boy to a whole new level.  :-)  The contest is already underway and lasts through February 9, 2014.  You can enter HERE. 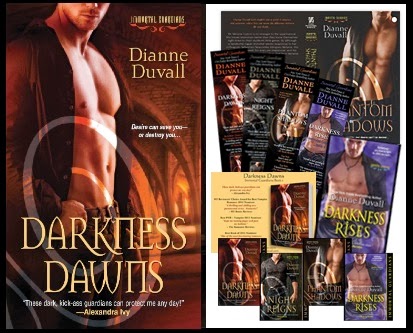 I'm also giving away a signed copy of Darkness Dawns + lots of Immortal Guardians swag to celebrate the New Year.  See how the series began!  :-)  This contest lasts through January 31st.  You can enter HERE. 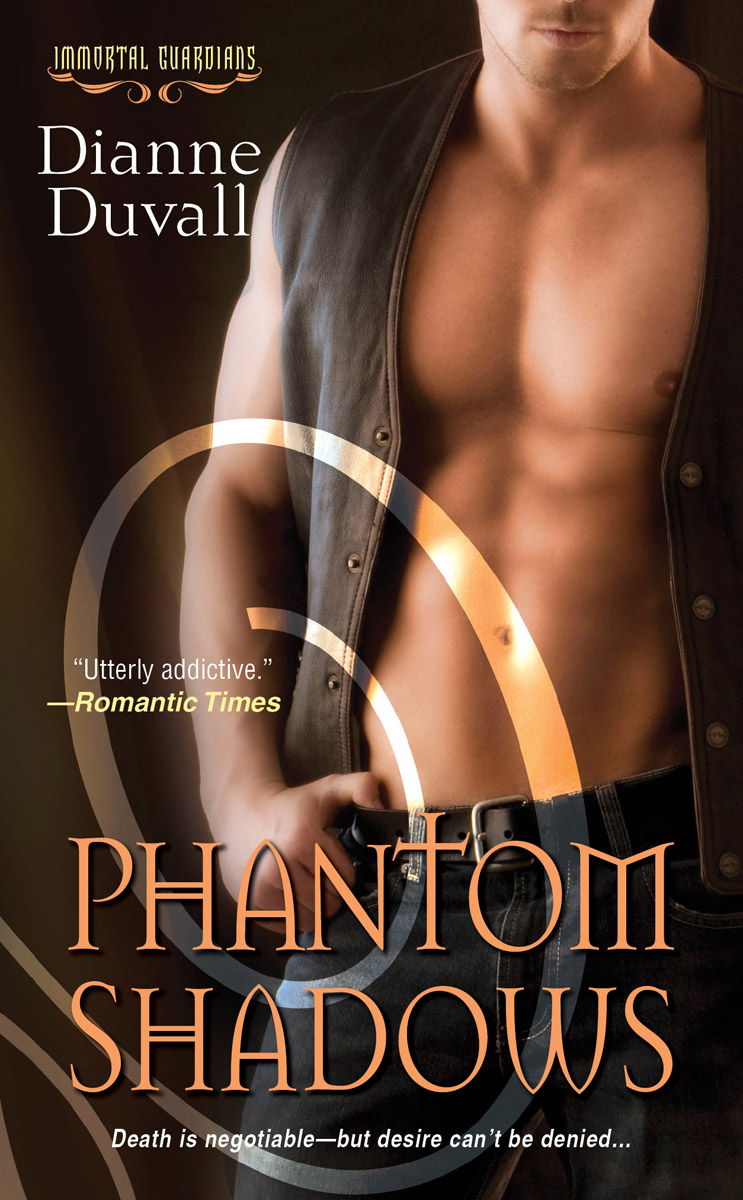 It's time once more for Favorite Quote Friday!  For today's selection, I thought I would give you a taste of a scene I mentioned in my article for The Romance Reviews.  It takes place in Phantom Shadows, Immortal Guardians Book 3, and features Ami (the heroine of Night Reigns) and Zach (the hero of Night Unbound).  I'll preface the quote by mentioning that Ami and Zach have just met for the first time in this scene.  Zach, who is not part of the Immortal Guardians family, has been tortured; and Ami sought him out after sensing his pain.  The scene is told from Zach's POV.

Don’t you fear me?  With her history, he would’ve thought she would be terrified of him.  He was, after all, aware of the anxiety that struck her whenever she encountered strangers.

And he was as strange a stranger as she would meet.

She shrugged.  You remind me of Seth.

That was a head-scratcher.  Neither?

If you’re not one, you’re the other.

If only things were that simple.

She shivered.  The cold must be creeping in through her jacket.

Gritting his teeth, he spread his wings, then drew them in close to form a shield that insulated her from the wintery wind.

She glanced at him from the corner of her eye.  I knew you were a friend.

Dianne
Posted by Dianne Duvall at 4:16 AM No comments:

Happy Friday!  I hope you've had a good week.  2014 has gotten off to a weird, hectic start for me.  I haven't had hardly any time online lately and am now trying to play catch-up.

I'm very happy to say Darkness Rises was chosen as one of Kari's Top 10 of 2013 over at From the TBR Pile!  She gave it a great review when it was released in October.  Here's a snippet:

"I'll start out by saying, this series just keeps getting better and better.  I know I say this every time, but I am so sad when I finish one of these books.  They just don't come out fast enough . . ."

You can read the rest of the review HERE.

Also, Étienne from Darkness Rises made Carmel of Rabid Reads' Top 10 Book Boyfriends of 2013 list!  She, too, gave it a wonderful review in October:


"It’s been a while since I’ve read a book in one sitting but as soon as I opened Darkness Rises there was just no stopping!"

You can read the rest of the review HERE.

I'm also working on updating my website.  If you visit it, you'll find excerpts, trailers, character interviews (in the free stuff section), contests, the latest news, a brief Immortal Guardians handbook, and more.  If there's something you're interested in seeing on the site that isn't there, I'm open to suggestions.  :-)

It's time once more for Favorite Quote Friday!  Bastien has been on my mind a lot this week, so I thought I would choose a quote from his book, Phantom Shadows (Immortal Guardians Book 3), for today's selection.  This scene takes place early in the novel and features Bastien and Dr. Melanie Lipton, the heroine:

Pretty brow furrowed, she touched his wrist to gauge his pulse and glanced over at the clock on the wall.

Her emotions flowed into him, courtesy of the gift with which Bastien had been born.   So much concern.  He wasn’t worth it.  But he devoured the sweetness of it like a piece of German chocolate pie after a long, long fast.

Relief replaced some of her concern.  “Your pulse is strong.”

And running faster than usual thanks to her nearness and her gentle touch.

I really like the role Bastien plays in Night Unbound and hope you will too.  :-)

Dianne
Posted by Dianne Duvall at 6:14 AM No comments:

Happy Friday!  For the students and teachers out there who have been enjoying a winter break, I hope you've had a nice vacation!  I'm guessing the skiers certainly have.  :-)

It's time once more for Favorite Quote Friday!  I thought I'd give you another excerpt of Darkness Rises, Immortal Guardians Book 4, today.  For those who are hearing of it for the first time, mortal Krysta Linz has dedicated her life to killing every blood-sucking vampire she can find.  Immortal Guardian Étienne d'Alençon has always admired strong women.  So, when he sees Krysta take on four vampires by herself, he decides he simply must convince her that not everyone with fangs and glowing eyes is the enemy.

In this scene, Étienne takes Krysta and her brother Sean to meet the rest of the local Immortal Guardians family for the first time:


[Darnell] reached behind him and pulled a handheld metal detector from his back pocket.

Étienne sighed.  “I apologize for this.”

Krysta did not look pleased.  “So you expect me to trust you, even though you clearly don’t trust me?”

“I trust you,” Étienne assured her.  He really did.

“If Étienne weren’t attracted to you, the rest of us would, too,” Darnell said, earning Étienne’s wrath.  “But smitten immortals have trusted the wrong humans often enough in the past to make us wary under such circumstances.”

A frown creasing her brow, she held out her arms.  “Smitten, huh?”

Sean eyed the two with disapproval.

Darnell passed the wand over Krysta’s head and chest, then down one arm.  It beeped.

Pursing her lips, Krysta rolled back the sleeve of the black shirt she had borrowed from Lisette and revealed a small sheathed dagger she had strapped to her wrist.

Darnell moved on to the other arm without removing the weapon.  Another beep.  A dagger graced her other wrist as well.  Two more beeps revealed more tucked into the waist of her pants.

“Well,” she declared defensively, “what did you expect?  Total trust?  I haven’t known you for that long and am going on faith that you all are what you say you are and aren’t vampires.”

Dianne
Posted by Dianne Duvall at 5:09 AM No comments: 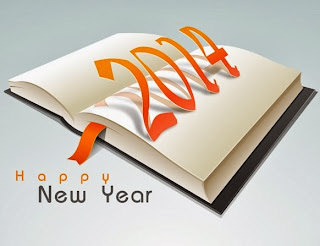 Happy New Year!  I hope 2014 has gotten off to a great start and will be a happy, healthy, and prosperous year for you all!!!  I am determined to get more writing done this year. :-)  What about you?  Any new year's resolutions you'd like to share? 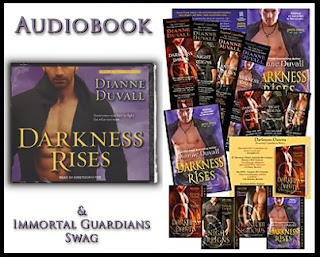 There are still a couple of days left to enter to WIN a Darkness Rises Audiobook and lots of Immortal Guardians swag!  The contest lasts through January 6th.  Details can be found HERE. 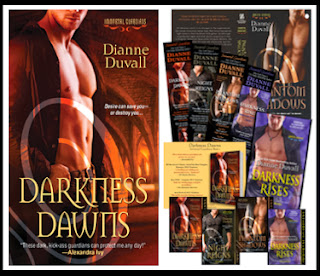 I'm also celebrating the new year by giving away a signed copy of Darkness Dawns + swag.  This contest lasts through the end of January.  You can enter HERE. 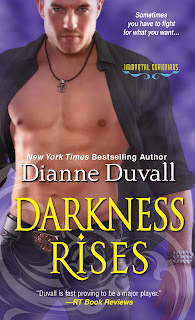 It's time once more for Favorite Quote Friday!  Seth, the leader of the Immortal Guardians, has been on my mind a lot lately because he plays such a large role in Night Unbound (Book 5).  So, for today's selection, I've chosen a quote from Darkness Rises (Book 4) in which Étienne, the hero, and Krysta, the heroine, are discussing Seth:

I told you he was powerful, Étienne said.

Dianne
Posted by Dianne Duvall at 5:02 AM 2 comments: