Happy Friday!!  Exciting news is brewing.  I'll share it with you soon.  (I can't wait!)  Until then . . . I wanted to thank everyone who picked up an Immortal Guardians book while they were on sale.  The first four books in the series were a Kindle Daily Deal on Monday and all four hit the Amazon Best Seller lists! 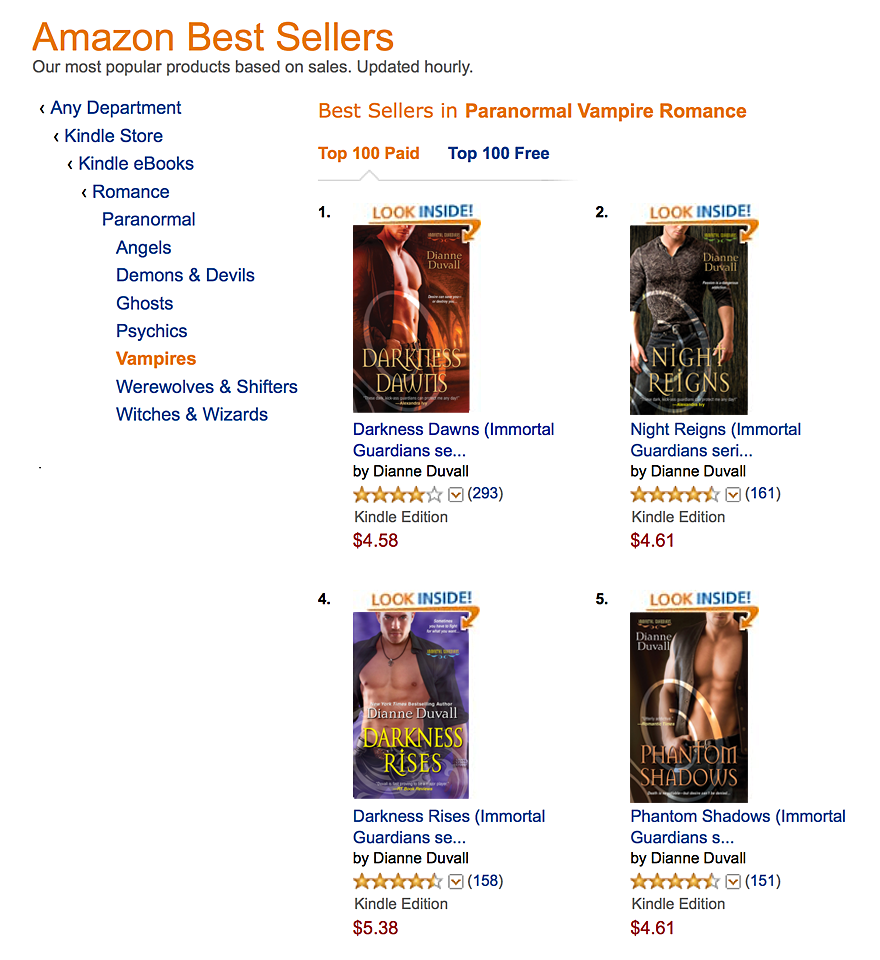 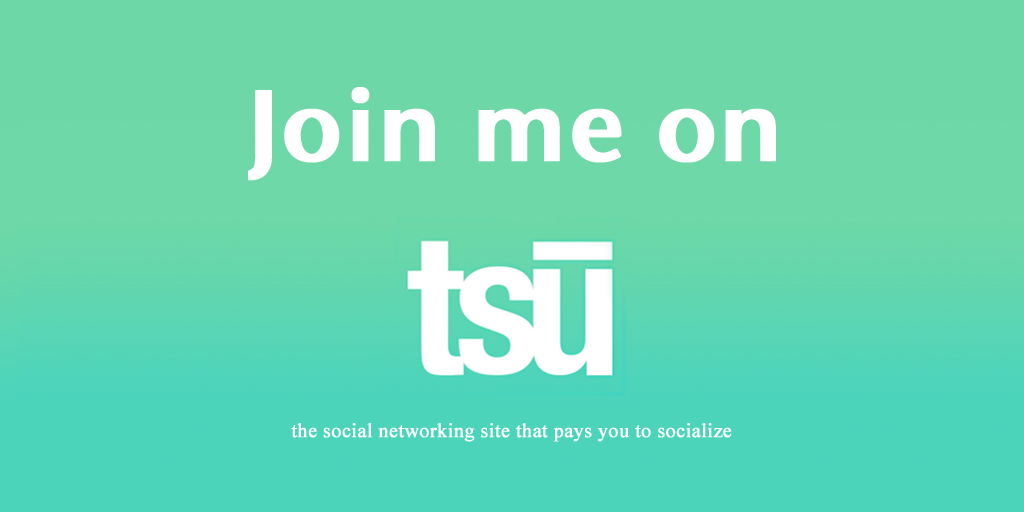 I also joined tsu this week!  If you haven't heard about it, it's the latest social media networking site.  It's very much like Facebook, but is much more author friendly.  When I first joined Facebook, anyone who liked my page would see my posts.  Now, unless I pay a fee each time I post, Facebook will only let about 2-8% of the people who have liked my page see my posts.  With tsu, anyone who friends or follows me can see my posts, so I'll be able to interact with more readers and writers.  I'd love for you to connect with me there.  I think you have to be invited, so here's a link that will allow you to do so:  tsu.co/DianneDuvall

From what I understand, tsu is also known as the social networking site that pays you to socialize.  But I don't know anything about that.  I just want to be able to be able to socialize with all of my friends, and like that tsu won't hide my posts from them or theirs from me.  :-)

It's time once more for Favorite Quote Friday!  Since Night Unbound is still on sale, I've chosen a quote from it for today's selection.  It's a narrative quote, told from the point of view of the hero, Zach.


She made him feel so much that was new to him.

All these millennia of existing, and he hadn’t really begun to live until he had laid eyes on Lisette d’Alençon.


Have a wonderful weekend!  And, if you're on tsu, I hope I'll see you there!

Posted by Dianne Duvall at 7:27 AM No comments:

It's the Ultimate Hero Showdown!!!

Round One of Kensington's Ultimate Hero Showdown has begun and the battle is off to an exciting start!  Not only can you vote for your favorite heroes, you can also take advantage of the huge sale that accompanies the event.  That's right—every featured hero's book is on sale, including . . .

Zach, from NIGHT UNBOUND, joins the fight today.  You can vote for him Today Only on Tumblr (you don't have to have a Tumblr account to vote) and on Kensington's website. 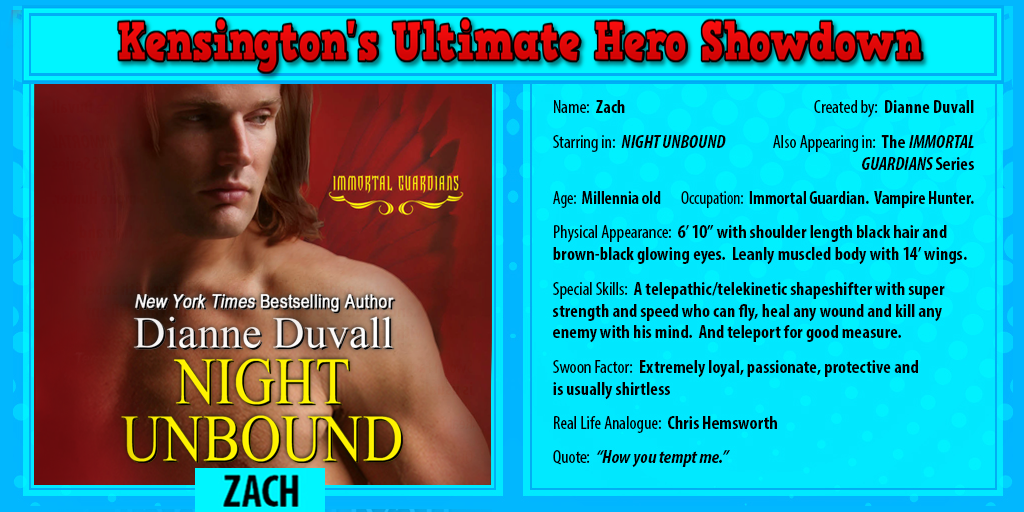 Not familiar with Zach?  Here's a glimpse of him in action:


Zach vanished, then reappeared only a few feet in front of the pack.

Lisette raised the tranquilizer gun and aimed it at the big vamp.

The vampires shuffled to a halt.

“Who the f*** are you?” one demanded, either too insane or too stupid to be afraid.

Lisette gasped as he tore through the vampires like a tornado.

Holy sh**, he’s fast! Richart thought and took a step forward, his fascinated gaze glued to the tempest below.

Zach stilled in the center of the pack, knees bent, blades dripping, face marbled with blood.  Seven vampires sank lifelessly to the ground, their bodies spread around him like the petals of a flower, as the virus went to work and they began to shrivel up like mummies.

And he loves Lisette with a depth he hadn't thought possible.  Zach would do anything to make her happy:

She brushed his hair out of his eyes.  “You’ve been pulling me into your dreams, haven’t you?  Intentionally?”

He nodded.  “I knew you missed the sun and wanted to share it with you.”

Her eyes burned as tears rose.  “Thank you,” she whispered.

He brushed a kiss across her lips.  “Anything for you.”

So I hope you'll join the fun and cast your vote!

Have a fantastic week!

Dianne
Posted by Dianne Duvall at 5:10 AM No comments:

A Sale, an Excerpt, and a Hero vs. Hero Smackdown

Happy Friday!  I've been hard at work, designing some new swag.  I hope to finish and order several boxes of it this weekend.  I'll post a pic here when it arrives.  :-)  I also mailed off some packages to contest winners.  Yay! 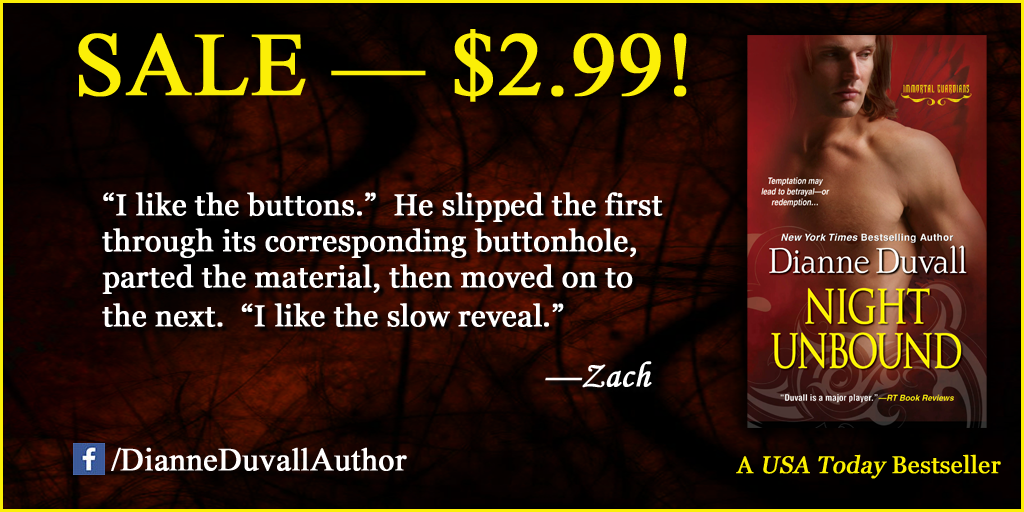 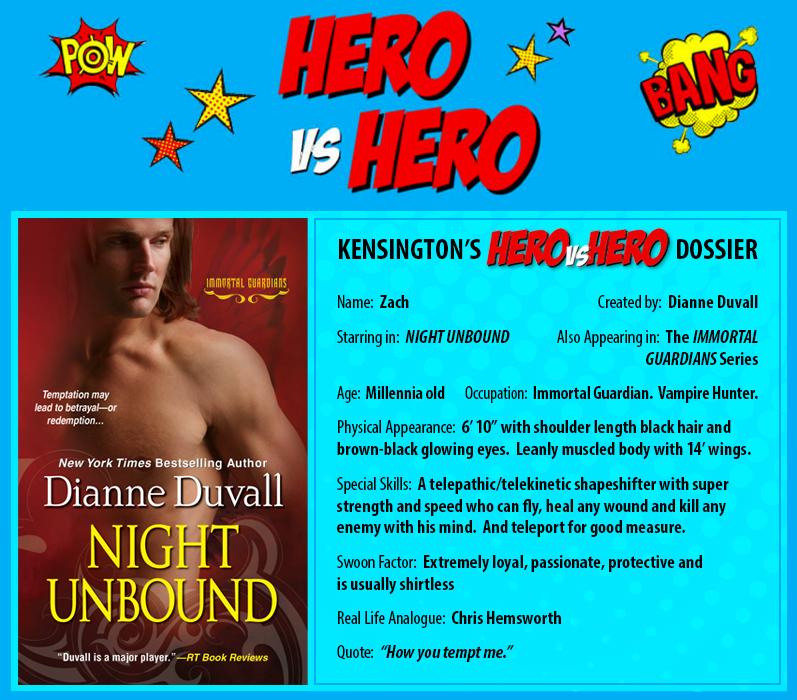 Also, Zach — the hero of Night Unbound — will be competing with other heroes in Kensington's big Hero vs Hero Smackdown.  The event begins next week.  Zach will compete on Wednesday, February 11th, so I hope you'll drop by and vote for him!  Voting only lasts 24-hours for each match.  You can get a sneak peek of the action and vote once it begins HERE.

It's time once more for Favorite Quote Friday!  Since Night Unbound featured prominently in my news this week, I thought I would give you a micro-excerpt from it today.  I try to keep my blog fairly family friendly for all the moms and dads out there who may have little ones perched in their laps or peering over their shoulders, so I'll preface this excerpt with a WARNING that it may not be appropriate for younger readers.  :-)

And, for those who haven't read Night Unbound, you should know that Lisette is telepathic, and I altered one sentence that I consider a spoiler in case you choose to take advantage of the sale and grab a copy.  ;-)  The excerpt features Zach and Lisette, the hero and heroine, and is told from Zach's point of view.

He smiled.  She did.  She knew him better than anyone else in the world.  He supposed that should unnerve him, but it didn’t.

She leaned back.  “For example, even if I couldn’t feel how tense and bunched up your muscles are, I would know you’re feeling stressed.”

Stressed didn’t quite cover it.

Peeking up at him between her lashes, she drew a circle on his chest with one finger.  “Maybe I can do a little something to help you relax.”

Every muscle in Zach’s body tightened as she drew that finger down his abdomen and tucked it into the waistband of his pants.

“You know, I’m still not used to seeing you in so many clothes,” she purred, and flicked open the button.

Zach swallowed, already hard and aching for her.  Tonight he had dressed as the Immortal Guardians did:  black pants, black shirt, long black coat, wings tucked away.

“It’s almost like I have two different lovers,” she continued, taking his zipper in her hand and lowering it an inch, knuckles brushing the erection straining against the black material.  “A mysterious Other who comes to me bare-chested and embraces me with wings as soft as silk.”  She lowered the zipper another inch.  “And a hunter, who comes to me dressed all in black and loaded down with weapons.”

Hell, he’d come to her dressed as a party clown, if she would just finish lowering the damned zipper.

You'll see quite a bit of Zach and Lisette in Shadows Strike.  Until then . . . have a wonderful weekend!

Posted by Dianne Duvall at 5:25 AM No comments: