Happy Friday! As always, I hope you and yours are staying safe and well. Thank you for making this such a fantastic week for me. Broken Dawn released on Tuesday in ebook, audiobook, and paperback and rapidly hit the Amazon, Audible, Nook, Kobo, and Apple Books Best Seller Lists. Woohoo!! 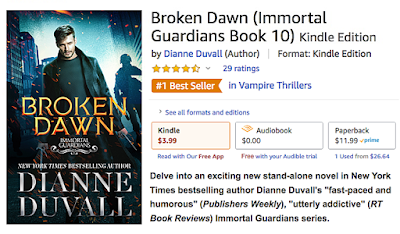 Broken Dawn also hit International Amazon Best Seller lists, so I'd like to thank all of the international readers who picked up copies this week. ❤️ 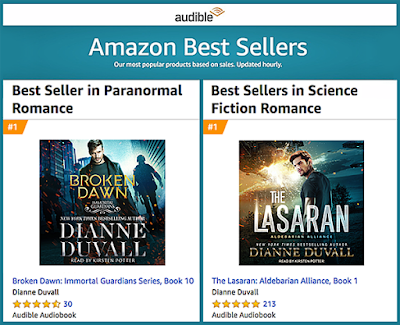 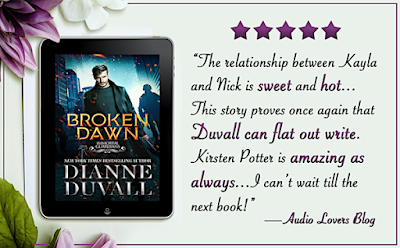 Audio Lovers Blog gave Broken Dawn a fantastic review. I just started listening to Broken Dawn on audio and have to say I agree—Kirsten Potter is amazing as always. 😊

You can read the Full Review HERE. 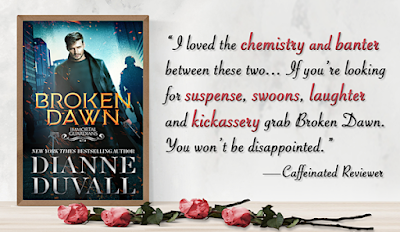 Caffeinated Reviewer gave Broken Dawn a wonderful review, too. Here's another quote from it:

"All of Duvall’s female characters have an inner strength and fight to them. Kayla is no different. Seeing her defend those stronger than her made me grin. Her daughter was a hoot too."

More reviews have been popping up on Amazon, Audible, Goodreads, etc.

⭐️⭐️⭐️⭐️⭐️
"Another HIT! I love Nick! This was another banger of a book! I loved Nick and I am so glad things worked out for him."
—ebony

⭐️⭐️⭐️⭐️⭐️
"Nick and Kayla's story was awesome. Zach has been my fav. but now Nick is right there. this was an a great summer read. Kirsten Potter does and excellent job as narrator."
—lynnb

⭐️⭐️⭐️⭐️⭐️
"This was such a great book. Dianne really did such a great job of pulling the North Carolina crew in while keeping the Houston IGs and Network as their own story. I am so looking forward to more stories."
—Ladee Harmony
⭐️⭐️⭐️⭐️⭐️
"Loved it and going to listen to it again and again! Nick and Kayla are another great IG couple."
—EmilyM

⭐️⭐️⭐️⭐️⭐️
"Not surprising. . . That I absolutely love this book!! How can I not, it's filled with so much fun, adventure, passion , loyalty, and humor."
—Shannon Garner

⭐️⭐️⭐️⭐️⭐️
"Sighs...it was absolutely wonderful, loved both characters. So sweet in how she reacted when he fully told her everything, hilarious in some parts as well. Loved it."
—Vixen 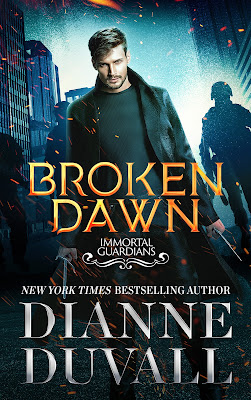 Since my Broken Dawn Blog Tour is still going strong, I thought I would do something a little different for this Favorite Quote Friday and share the two latest stops, where you can find five favorite quotes and a tantalizing excerpt of Broken Dawn.

Don't forget to visit the stops on the Broken Dawn Blog Tour and enter to win 1 of 3 Amazon Gift Cards that are up for grabs. You can find the full schedule at Author's Taproom.

Stay safe and have a wonderful weekend!

Today is the day!
Broken Dawn is Now Available!

Nick Belanger can’t stop thinking about the single mother who lives next door. She’s smart. She’s funny. She’s so beautiful he can’t stare at her too long for fear his eyes will start to glow. But Kayla thinks he’s just an ordinary guy who works in security. Finding out he instead is a powerful immortal warrior who hunts and slays psychotic vampires for a living may not go over well, particularly since she has a daughter she doesn’t want to endanger.

Kayla Dorman can keep neither her gaze nor her thoughts from straying to the man next door. Who can blame her really? He is the epitome of tall, dark, and handsome with smart, charming, and honorable thrown in. He’s also a few years younger than her and surely would not be interested in a single mom who hasn’t dated since her divorce. At least that’s what she thinks until an accident nearly takes her life and Nick risks all to save her.

The dynamics of their relationship swiftly change. The friendship they’ve developed over the years deepens into love as the two spend every minute they can together, laughing and teasing, never suspecting a threat may lurk in the shadows. But that threat soon strikes, making it clear that Nick is the target and his enemy doesn’t care if Kayla gets caught in the cross fire. Though Kayla bravely rises to the occasion and is determined to do whatever it takes to help Nick defeat his enemy, Nick is terrified of losing her. Can he identify and eliminate his new nemesis before the man takes everything from him?

For those who are just hearing about Broken Dawn, I'll preface this by mentioning that Eliana is Nick's hunting partner.

Consciousness beckoned. Kayla fought it, wanting to remain in dreamland a little longer. A large body curled around hers, warming her back and infusing her with peace and contentment. Curling her fingers around a big hand, she hugged it to her chest . . . then stiffened. Her eyes flew open. “Oh sh**.”

Kayla rolled onto her back and looked up.

Nick smiled down at her, his hair rumpled and his handsome face coated with thicker stubble. “Morning.”

“Don’t be. I’ve fallen asleep on this sofa many times myself.”

Sure, because it was his sofa, upon which he had apparently slept last night. With her.

Wait. Had he even had a choice? Had she fallen asleep on him? Was that why he’d slept on the sofa with her?

Heat filled her cheeks, then deepened when she realized she was still holding his hand between her breasts. Hastily releasing him, she sat up. Her chestnut hair tumbled around her shoulders in what probably resembled a bird’s nest. She couldn’t be one of those lucky women in the movies who woke up with their hair spread across the pillow in lovely, shining waves. No, hers probably looked more like a maniacal squirrel had wrought havoc in it until it stuck out in weird angles.

As casually as she could, she combed her fingers through it in an attempt to tame it. “What time is it?”

“Nine. You’ve only been asleep for about three hours.” He sat up beside her, careful not to accidentally nudge her off the cushions. “Sorry we kept you up so late. I should’ve warned you that Eliana and I are both night owls. Hazards of the job and working nights.”

“That’s okay. Where is she?” And how pissed would she be about Kayla cuddling up with Nick? Eliana had said they were just friends, but that could’ve meant friends with benefits.

She paused. Why had he felt the need to clarify that, to make it clear Eliana wasn’t in his room?

He smiled and offered her a slight shrug. “You were sleeping so soundly I couldn’t bring myself to wake you.”

So he had opted to sleep beside her?

As if he could hear her thoughts, he added, “And I didn’t want you to roll over and fall off.”

Kayla eyed the large sofa and the ottoman. She suspected there had been little danger of that and thus no need for him to have lain down with her.

She arched a brow.

Nick cleared his throat. “I was tired?” he suggested hopefully.

He looked so adorably sheepish that amusement danced through her. “I guess we both were.”

His charming smile reviving, he tucked several stray strands of hair behind her ear.

Her skin tingled at the innocent touch.

Her gaze dropped to his soft lips. 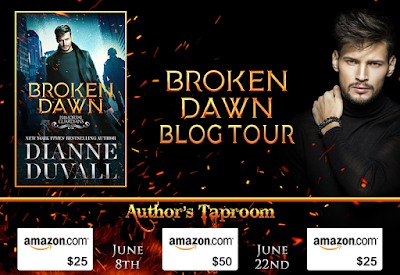 
Join the fun and enter to win an Amazon Gift Card. You can find the full schedule at Author's Taproom.

Posted by Dianne Duvall at 3:36 AM No comments:

Happy Friday! I hope you're all staying safe and well. It's been a very busy week for me. Broken Dawn releases next week, so I'm starting to get that familiar fluttery, excited feeling in my stomach. I can't wait for you to meet Nick and Kayla. And for fans of my new Aldebarian Alliance series, I can't wait for you to see Eliana before her big transfer. 😉 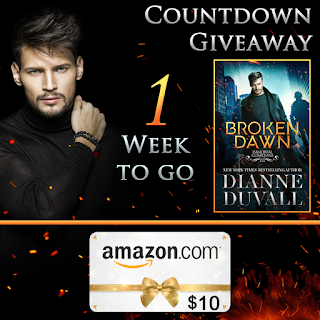 Less than a week to go! Broken Dawn releases on Tuesday, so this week I launched another Countdown Giveaway on Facebook. I'll choose a winner tonight (Friday night), so there's still time if you'd like to enter to win an Amazon Gift Card. 😊 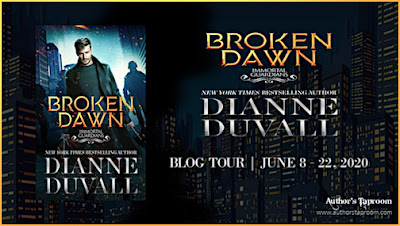 My Broken Dawn Blog Tour has begun, and we're already having a lot of fun. Join us for fun posts, excerpts, author Q and A's, and chances to win 1 of 3 Amazon Gift Cards up for grabs. Here are some of the posts you may have missed:

Bury Oneself in a Good Book
Spotlight

You can find the full tour schedule at Author's Taproom.

Can I just say again how thrilled I am by readers' and reviewers' responses to The Lasaran? I'm very excited about this new series. And every day, I'm asked when The Segonian, Aldebarian Alliance Book 2 will release. So for those who haven't heard, I'm writing it now and am having a lot of fun with it. I don't have a date yet, but I plan to release it later this year. 😊

Meanwhile fantastic reviews continue to roll in for the first book, The Lasaran. 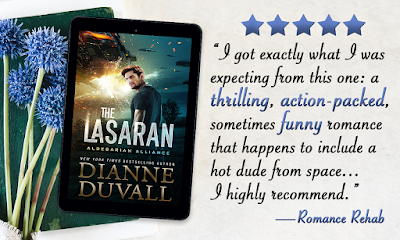 Romance Rehab gave The Lasaran a wonderful review. Here's another quote from it:

"I liked the heroine, Lisa, because she was smart and kind-hearted, but the real star of this series for me was Taelon. He was a cinnamon roll hero of the HIGHEST order.  He was never anything but sweet and considerate towards Lisa. He's pretty much the antidote to all the manwhore, bully, alphaholes you find in romance these days.  Badass in a fight and hot in bed, but a real gentleman everywhere else. I liked him A LOT." 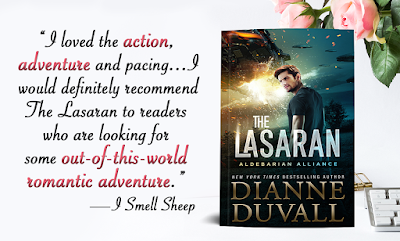 I Smell Sheep gave The Lasaran a great review, too. Here's another quote from it:

"Dianne Duvall is kicking off a promising new series with The Lasaran and I couldn’t have been more thrilled to read it, nor more excited for the next book in the series."

It's time once more for Favorite Quote Friday! For today's favorite quote, I thought I'd give you another sneak peek into the pages of Broken Dawn that includes some of the North Carolina Immortal Guardians. I'll preface this by mentioning again that Kayla is the heroin, Nick is the hero, and Eliana is Nick's hunting partner.
______________________________

Eliana clapped her hands together. “So. What’s the plan? I think the men should go hunting as usual while Dana and I stay home and have a girls’ night in with Kayla.”

Aidan shrugged. “Works for me.”

He sent Eliana a squinty-eyed look full of suspicion. “You aren’t going to pump her for information about our relationship, are you?”

She assumed an exaggeratedly innocent expression. “Who me? Would I do that?”

She grinned. “Then I guess that’s a great big maybe, baby.”

Only a few days to go now. I can't wait to hear what you think of it!

Stay safe and have a wonderful weekend!