Woohoo!  It's Friday!  I am SO looking forward to the weekend!  I have a variety of news for you.

First, I'm In the Author Spotlight this week over at Ann Lory's Blog Bites, where I'm giving away a signed copy of Darkness Dawns.  Drop by Blog Bites and tell me what special gift or ability you would like to possess for a chance to win.  I'll choose a winner at the beginning of next week.

Second, I finished the Night Reigns edits my editor requested.  I can't remember if I told you, but I only needed to change a word here and a sentence there, so I was very pleased.  And my editor was happy with the results.  Yay!  I also enjoyed reading through the story again.  I really like Marcus.  I'm glad he's getting his HEA.  It's funny.  While I was pursuing publication, I thought my worries would end once I signed that first contract.  Then I signed the contract and worried like crazy about the release, hope-hope-hoping readers would like it.  So I thought, if readers liked Darkness Dawns, then my worries would really be over.  Well, I'm thrilled with the responses readers have had to Darkness Dawns, so much so that words just don't convey it.  And yet . . . my worries aren't over, because now I'm figuratively chewing my nails (that's actually one bad habit I don't have), waiting to see if readers will like Night Reigns as much as they liked Darkness Dawns.  :-)  I'm guessing I'll be stricken with several bouts of insomnia between now and December.

Third, I sent all of the information requested for Brenda Novak's Annual Auction for the Cure of Diabetes.  Here's the picture I took for it: 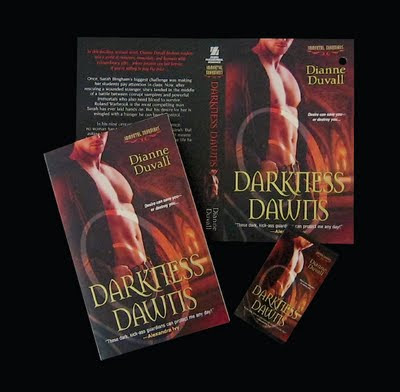 You can find my listing -- an autographed copy of Darkness Dawns, an autographed cover flat, and a mini-bookmark -- here and other listings here.   Pass the word along.  It's for a good cause and I'm very honored to have been asked to participate.  Bidding begins in a couple of days.  I plan to bid on some items myself.  :-)
That's it for now.  I hope you all have a wonderful weekend!
Dianne
Posted by Dianne Duvall at 5:41 AM 2 comments:

I hope you're enjoying the holiday weekend.


Q: Ami's rescue hints that there may be other enemies besides vampires that the Immortals must contend with - true or false, and can you elaborate?
A: True. In Darkness Dawns, Bastien sets into motion the proverbial snowball rolling down the hill. His actions in raising the vampire army and enlisting the help of biochemist Dr. Montrose Keegan will set off a chain of events that will produce enemies that will threaten the Immortal Guardians' existence. Readers will get a glimpse of this - and how it all relates to those from whom Ami was rescued - in Night Reigns.


"Darkness Dawns is an engaging and entertaining
introduction to Duvall's Immortal Guardians world,
one I look forward to visiting again in future installments."
~~~~~ Giveaway! ~~~~~
Page Fliperz - Kat With Many Tales is giving away a copy of Darkness Dawns for the Hoppy Easter Eggstravaganza Giveaway Blog Hop.  There are other prizes as well.  The contest continues through the 25th, so hop on over for a chance to win! 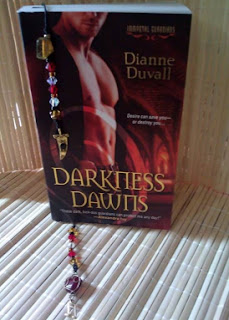 DallaLuna has created this Darkness Dawns inspired book charm / book thong.  I love how one end represents Roland the warrior and the other represents Sarah the music professor.  Isn't it cool?  I just wanted to share it with you.

Posted by Dianne Duvall at 7:38 AM No comments:

Logline
When Professor Sarah Bingham rescues a wounded stranger, she unexpectedly finds herself thrust into a war that erupts between vampires and immortals, then loses her heart to the dark, enigmatic warrior who seeks to protect her.


Terms of Interest
Gifted Ones:  Men and women born with unusual talents and abilities (healing, telepathy, shape shifting, telekinesis, teleportation, etc.) as a result of far more complex DNA than that of ordinary humans.
Immortals (Immortal Guardians):  Gifted ones who have been infected with a rare symbiotic virus that first conquers, then replaces their immune system, lending them incredible strength, speed and longevity.  Unfortunately, it also leaves them vulnerable to sunlight and in need of regular infusions of blood.

Vampires:  Ordinary human men and women who have been infected with the same rare symbiotic virus that infects immortals.  Because they lack the advanced DNA of gifted ones (which mutates the virus into something less corrosive), they suffer brain damage from the virus’s continuous assault and rapidly descend into madness.

The Network:  A network of humans amassed over the centuries to aid the Immortal Guardians.  The employees range from Seconds (personal assistants and guards of individual immortals) to cleaners (those who “clean up” the messes immortals sometimes leave behind when hunting vampires) to doctors and scientists who are searching for a cure for the virus or at least some way to prevent the brain damage that occurs in vampires.


Cast of Characters
Sarah Bingham:  A music theory professor at UNC Chapel Hill.  The spring semester has ended and her only desire is rest and relaxation . . . until she finds Roland staked to the ground, being tortured by two others, in the meadow behind her home and uses her trusty shovel to liberate him, becoming the target of a vicious vampire army.

Roland Warbrook:  A nine-hundred-and-thirty-six-year-old immortal born with the ability to heal with his hands.  Betrayed one too many times in the past by those he loved the most, he now distances himself from relationships of any kind and trusts no one . . . until Sarah charges into his life.

Bastien (Sebastien Newcombe):  Roland’s new nemesis.  He has done what was previously considered impossible -- raised a vampire army large enough to pose a serious threat to the Immortal Guardians -- and intends to eradicate them one victim at a time while pursuing a personal vendetta against Roland.

Marcus Grayden:  An immortal who disregards Roland’s reclusive disposition and calls him friend.  He recently lost the woman he has loved for eight centuries and, consumed with grief, is skating the edge as he aids Roland in battling Sebastien and his vicious army.

Seth:  The eldest and most powerful Immortal Guardian.  He possesses all of the paranormal abilities the others boast combined and then some.  As their self-proclaimed leader, he considers it his responsibility to seek out all newly transformed immortals, ease their transition into their new life, train them, guide them, give them a new purpose and, if necessary, punish them should they stray from the boundaries he sets for them.

David:  The second eldest and most powerful Immortal Guardian.  Like Seth, he considers all immortals and their Seconds family and opens his homes to them, aiding them in any way he can and putting their safety and happiness above his own.

Amiriska (Ami):  A mysterious woman of unknown origins Seth and David rescue from a facility heavily guarded by either the military or mercenaries.

“Beautiful, brave and possessed of violent tendencies.  I like her.”
~ Marcus ~

“Speaking of bloodbaths, what happened at the meeting?”
~ David ~

Blurb
Once, Sarah Bingham’s biggest challenge was making her students pay attention in class. Now, after rescuing a wounded stranger, she’s landed in the middle of a battle between corrupt vampires and powerful immortals who also need blood to survive. Roland Warbrook is the most compelling man Sarah has ever laid hands on. But his desire for her is mingled with a hunger he can barely control . . .

In his nine centuries of immortal existence, no woman has tempted Roland as much as Sarah. But asking her to love him is impossible -- when it mean forfeiting the world she’s always known, and the life he would do anything to protect.
Posted by Dianne Duvall at 4:07 PM No comments:

This, That, and The Other

It’s been quite a while since I last blogged, which is not good considering one of my New Year’s Resolutions was to blog more regularly.  A lot has been happening of late.  Darkness Dawns has been on the shelves for just over two months now.  I’m thrilled by the reviews it’s been getting, both by book reviewers (magazines and blogs) and by online bookstore customers.  It’s been given 60 5-star reviews so far on Amazon alone!  I’m very excited because whenever I find a new book I’m interested in buying, the first place I visit is Amazon to see what the general consensus is among those who’ve read it.

My Blog Tour has ended.  I’m steadily receiving winner notifications and mailing signed copies of Darkness Dawns to the winners.  Thank you again, everyone who joined me on the tour!  I also just participated in the big Paranormal Spring Break over at Parajunkee’s View, where I posted a mini-handbook for the Immortal Guardians, describing characters, listing favorite quotes and more.  I’m thinking of adding a similar handbook to my website.

I’m going to be interviewed on Ann Lory’s Blog Bites on April 25th.  I also will  be interviewed by Bookloons.com sometime in the next couple of weeks.  I’ll post the date as soon as I know it.  I’ve been invited to participate in the Bookish Haven Summer Vacation in June and am looking forward to it.  I’ve also been invited to participate in Brenda Novak’s Annual Diabetes Auction.  What an honor!  I’ll be putting a signed copy of Darkness Dawns with a signed cover flat and mini-bookmark up for bid.

I’ve received the most wonderful emails from Darkness Dawns readers.  I’m way behind on responding to them because of the Blog Tour and a few family crises that yanked me away from the computer (everything’s fine now), but intend to reply to all of them.  I’m behind on facebook, too, and hope to catch up soon.

And did I mention that Kensington sold Thai rights to  Darkness Dawns?  Woohoo!  I can’t wait to see a copy!

That’s about it for now.  What’s been going on with you?  Are you whittling away at your TBR pile?  Writing up a storm?  Looking forward to summer vacation?