I'm introducing another new blog segment today:  Favorite Quote Friday.  I thought this would be a fun way to give readers little sneak peeks into the pages of Darkness Dawns, Night Reigns, and future books in my Immortal Guardians series.  I hope you'll enjoy it.


Do you have a favorite quote from Darkness Dawns you'd like to see here?  Email me at dianne [at] dianneduvall [dot] com with "Favorite Quote" in the subject line.  You can find more favorite quotes on the Immortal Guardians Handbook page.
Have a great weekend!  And for those in Hurricane Irene's path:  Stay safe!
Dianne
Posted by Dianne Duvall at 10:23 AM 3 comments:

Thank you, everyone who joined me over at Book Monster Reviews and  Literal Addiction Paranormal Book Club for the fun Q&A and Contests!  The winners of signed copies of Darkness Dawns are:

Leanne G.
and
Yadira A.
Congratulations!!  I hope you enjoy them!

Dianne
Posted by Dianne Duvall at 7:31 AM No comments:

Hi all,
This is just a reminder that I'll be giving away 2 signed copies of Darkness Dawns today over at 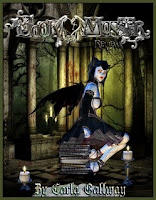 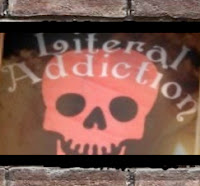 Dianne
Posted by Dianne Duvall at 3:25 AM 2 comments:

Hi again!  I have lots of news to share with you today. 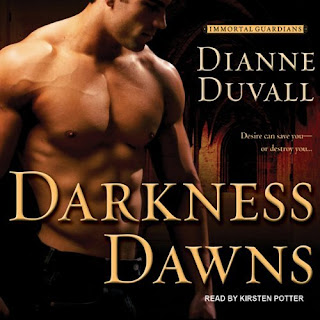 Don't you just love the cover?  It's read by Kirsten Potter and has already been getting great reviews and ratings.  Hot Listens Romance Audiobooks gave it

"A very interesting, and distinctive take on the paranormal world
of vampires"

It's available at Amazon.  You can also listen to an audio sample here.


~~~ And the Winner is  ~~~
Next, the winner of a signed copy of Darkness Dawns over at Paranormal Haven is:


Kanya!
Congratulations!  I hope you enjoy it!

I'll be interviewed and give away two signed copies of Darkness Dawns in a great Book Monsters and Literal Addiction Paranormal Book Blub collaboration on Wednesday, August 17th.  I hope you'll join me! 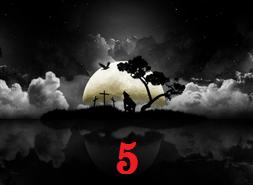 "Action from the beginning until the end!  I couldn't put it down!"
That's it for now.  Thanks so much for dropping by!  I hope you all have a great week!

Dianne
Posted by Dianne Duvall at 6:25 AM No comments:

It's time for another installment of Immortal Guardian Music Monday.

As I combed through my manuscripts in search of music references, it occurred to me that many of the songs mentioned are ringtones.  Apparently hunting crazed vampires, quelling uprisings, identifying new enemies, trying to track down and thwart those enemies, encountering new paranormal beings, searching for a cure for the virus, and falling head over heels in love doesn't leave much time to sit back, relax, and listen to music.  So, today's selection is Sarah's ringtone in book three (not yet titled) of my Immortal Guardians series:  Mack the Knife.

For those who haven't yet read Darkness Dawns, Sarah is a music theory professor at UNC Chapel Hill when Roland meets her.  As such, I thought Mack the Knife would appeal to her.  It's a song that was composed by Kurt Weill with lyrics by Bertolt Brecht for Die Dreigroschenoper, or The Threepenny Opera, which happens to be one of my favorite operas and revolves around a serial killer.  Most music lovers, however, are more familiar with this version -- the Bobby Darin version -- that reached number one on the Billboard Hot 100 chart in 1959.  I hope you enjoy it!


I'll be back tomorrow or Wednesday to share the latest news with you.
Have a great week!
Dianne
Posted by Dianne Duvall at 5:49 AM 2 comments: