Hello, all! It's been quite a long time since I last posted. I hope this finds you all safe and well and that you've been having a nice summer. I have VERY exciting news to share with you today. 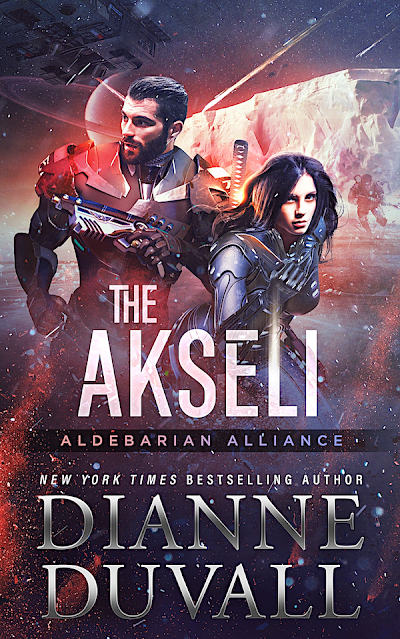 — Praise for the Aldebarian Alliance Books —

"Gripping... This could be a movie!"
—Obsessive Reading Disorder

Here's a sneak peek into the pages of Simone and Janwar's story.

As she allowed Janwar to pull her along after him, Simone murmured, “They seemed a bit in awe of you.”

“How large a bounty?” she asked.

He spouted a number.

Simone blinked. “That’s a damn big bounty.” Big enough to lure both the greedy and the desperate.

“Have you ever considered that perhaps they simply hate you because you’re so drekking handsome?”

Halting so suddenly that she nearly bumped into him, he turned to face her. “You think I’m handsome?”

She rolled her eyes. “Everyone thinks you’re handsome, Janwar.” She jerked a thumb over her shoulder, where she knew Soval hovered. “Soval told me that’s the only reason he agreed to join your crew. I even caught him checking out your ass when you weren’t looking.”

A choking sound accompanied a faint breeze that ruffled the hair atop her head.

Swiveling around, she craned her neck to peer up at the brawny warrior.

Soval looked about as appalled at the notion of checking out Janwar’s ass as he would if she’d offered him a plate of monkey dung for dinner.

Simone couldn’t help it. She burst into laughter. “Relax. I’m only teasing.” She gave his barrel chest an affectionate pat before turning back to Janwar. “He didn’t check out your ass.” She winked, then whispered. “I did.”

The corners of Janwar’s lips twitched. “And?”

She grinned. “Your ass is very nice.”

Laughing, he resumed leading her through the throng.

Did you know I have a monthly newsletter? Would you like to have the latest book news, sneak peeks, sale alerts, giveaway news, and more delivered right to your inbox? If so...

I hope those of you who pre-order The Akseli will enjoy Simone and Janwar's story! It was so much fun to write.
Have a wonderful weekend!

Dianne
Posted by Dianne Duvall at 7:42 AM 12 comments: