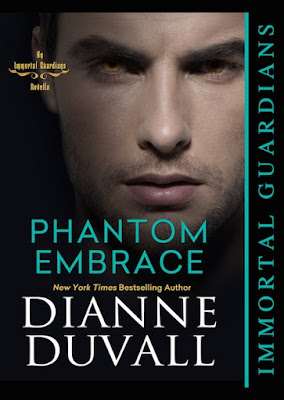 I'll look over the swag one last time this weekend, then order several boxes of each.  Can't wait to start giving it away!!

I also wrote a new blurb for Phantom Embrace.  This novella (Yuri and Cat's story) was first released in the On the Hunt anthology last year, so the blurb—of necessity—had to be very short.  I thought readers who are unfamiliar with either the story or the series would like a little more information, so I wrote a longer blurb:


Born with the ability to see spirits, immortal Yuri Sokolov avoids making contact with them, because such has always yielded negative results . . . until lovely Cat Seddon begins haunting his home and his dreams. As a new threat rises against the Immortal Guardians, Yuri disregards all the rules so he can be with Cat, even though the consequences are substantial.

For centuries, Catherine Seddon has been alone. When her brother is forced to join the Immortal Guardians’ ranks, she haunts the primary home of the powerful warriors to keep an eye on him, and soon finds herself captivated by Yuri. The handsome Russian immortal swiftly banishes her loneliness as friendship grows between them and deepens into love. But can two people who can never touch find a future together?

“Duvall's hauntingly beautiful novella, set in the world of the Immortal Guardians, portrays the deep love between two people who can never touch, with a wonderfully unexpected ending.”
—Publishers Weekly

Only two months until the release!  :-) 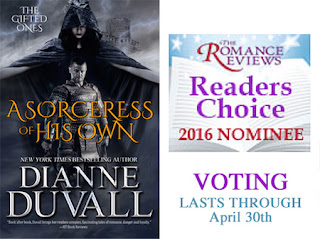 Thank you, everyone who has voted for A Sorceress of His Own, which has been nominated for The Romance Reviews Readers Choice Award for Historical Romance.  I know I've probably said this before, but I'm so thrilled that my first indie release was nominated.  This book in particular means a lot to me, because it inspired my Immortal Guardians' series and introduced me to Seth, Marcus, and Roland.  :-)

Voting lasts through Saturday, April 30th.  So if you enjoyed Dillon and Alyssa's story and would like to vote, there's still time to do so HERE. 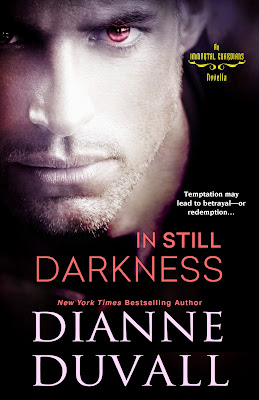 It's time once more for Favorite Quote Friday!  While anticipating Phantom Embrace's upcoming release, I've been thinking about my first novella's solo release, so I thought I would give you a brief excerpt from In Still Darkness today.  :-)


Weaving on her feet, the woman straightened and looked up at him.  She couldn’t be much more than five feet tall and he was six foot one.  “Y-your eyes are glowing.”

Her pupils were dilated, blocking out almost all of the pale green, leaving only a few flakes of brown.

Richart retracted his fangs.  “Yes.  I know it looks bad, but—”

She shook her head.  “I think they’re beautiful.”

Was that the drug talking?  Or did she really think so?

“You saved me,” she said, awe and gratitude in her melodic voice.  Loosening her death grip on his shirt, she cupped his face in both hands.

When was the last time a woman had touched his face so tenderly?

When was the last time a woman had touched him at all?  Other than his sister punching him in the shoulder, doing her damnedest to kick his ass when they sparred, or doling out a hug here or there, he honestly couldn’t remember.

“Thank you,” the woman whispered.  Rising onto her toes, she drew his head down and brushed her lips against his.

The contact hit him like an electrical shock.  His heart began to pound as she tilted her head and increased the pressure, brushing, stroking.  She combed her fingers through his short, black hair, sending shivers through him.

He parted his lips, met her tongue with his when she boldly thrust hers forward.

She leaned into him, clutched him tighter.

His body hardened.  His breath shortened.  His arms tightened around her.

Her knees went limp.  Her lips tore away from his as her head fell back.  Her eyes closed.  Her mouth hung open, lips pink from kissing him.

Richart stared down at her as his pulse pounded in his ears.

I still love these two together.  :-)

Posted by Dianne Duvall at 6:21 AM No comments:

Happy Friday!  This has been a rather tumultuous week.  Storms rolled in, bringing hours of unrelenting hard rain, harsh winds, near constant lightning, and a lot of flooding.  It was almost like having a tropical storm park itself over us. But it looks like the sun is finally coming out and will stay out, at least for a few days.  So I will be ungluing myself from the news, radar, and windows and will spend the weekend with Robert and Bethany (and Marcus) from Rendezvous With Yesterday.  :-) 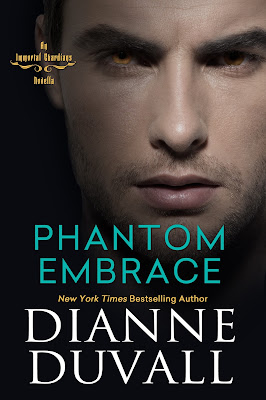 “Duvall's hauntingly beautiful novella, set in the world of the Immortal Guardians, portrays the deep love between two people who can never touch, with a wonderfully unexpected ending.”
— Publishers Weekly

Just a reminder:  Phantom Shadows, the Immortal Guardians novella that tells Yuri and Cat's story, will release on June 28th and is available for Pre-Order.  It was previously released in the On the Hunt anthology, but I know some readers don't care for anthologies and haven't read it yet.  I hope you'll enjoy it!  I've wanted to write Cat's story ever since Darkness Dawns.  :-)

It's also time to plan my Phantom Embrace Blog Tour, which will include Author Posts, Interviews, Excerpts, Spotlights, Reviews, a tour-wide Giveaway, and more.  So if you're a blogger and would like to participate, you can learn more and sign up here.

If you missed my last post, A Sorceress of His Own—The Gifted Ones Book 1 and my first Indie release—has been nominated for The Romance Reviews Readers Choice Award in Historical Romance.  Voting continues through April 30th.  So if you've read it and enjoyed it and would like to vote, you can vote here.  You have to sign in to vote, but accounts are free.  (I have one myself.)  And there are a lot of other categories to explore while you're there.  :-) 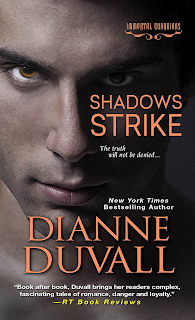 It's time once more for Favorite Quote Friday!  Today I thought I would share a favorite narrative quote from Shadows Strike, my most recent Immortal Guardians novel.  (If you haven't read the series, don't worry.  Shadows Strike can be read as a stand alone.)

The immortals’ eyes all flashed amber as they shot forward, a sea of black that rose like a tidal wave, swept over the walls, and poured inside.

I hope all of my friends out there are staying safe and dry!  Have a wonderful weekend!

Dianne
Posted by Dianne Duvall at 5:38 AM No comments:

Email ThisBlogThis!Share to TwitterShare to FacebookShare to Pinterest
Labels: A Sorceress of His Own, historical romance, paranormal romance, Phantom Embrace, Shadows Strike

Happy Friday!  I haven't posted in quite a while.  Those of you who have been following my blog for several years or who are friends with me on Facebook know that I believe in putting family first.  And I needed to put family first for a bit.  Though I still managed to pop onto Facebook periodically, I wasn't able to do my weekly blog posts.  BUT I'm back.  :-) 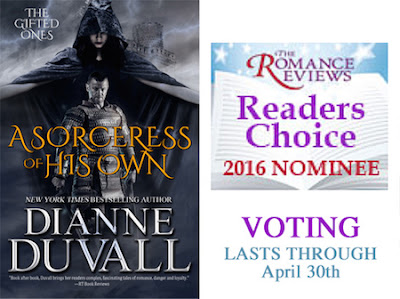 And I have great news to share!  A Sorceress of His Own has been nominated for The Romance Reviews Readers Choice Award in Historical Romance!  Voting has already begun and lasts through April 30th.  You have to sign in to vote, but accounts are free.  (I've had one for years.)  So if you'd like to vote, you can Vote Here.

Phantom Shadows, the Immortal Guardians novella that tells Yuri and Cat's story, will be released on June 28th.  (This was previously released in the On the Hunt anthology.)  Author's Taproom is busy planning my Phantom Embrace Blog Tour.  The tour will run from June 20th—July 3rd and will include a tour-wide giveaway.  If you're a blogger and would like to join it, you can Sign Up Here. 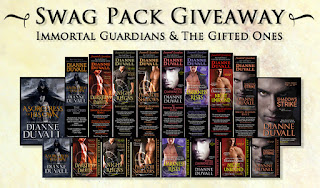 I thought I would also mention that I'm going to give away a swag pack over on My Facebook Page this weekend.  I hope you'll drop by and join the fun!

It's time once more for Favorite Quote Friday!  Yuri and Cat have been on my mind a lot this week, so I thought I'd give you a quote from their novella.  :-)  The following is a snippet of a conversation that takes place between Yuri (the hero) and Marcus, one of his fellow Immortal Guardians:


Yuri looked at Marcus and found him scrutinizing him a little too carefully. “What?”

Have a wonderful weekend!  :-)

Dianne
Posted by Dianne Duvall at 3:52 AM No comments: