THE AKSELI Audiobook and Other Fun News!

Hello, all! As always, I hope this finds you safe and well. A lot has happened in the month since my last post. A long spate of cloudy, thunder-boomy days finally brought an end to our excruciatingly hot, record-breaking, triple-digit temperatures. (And you know how much I love to write when it's stormy outside.) I dove into my next manuscript. And I have exciting Akseli news!

Now Available for Pre-Order
on Audible!

THE AKSELI is Now available for Pre-Order in audiobook format! Woohoo!! Kirsten Potter is a fantastic narrator (and fun to work with). So if you've never listened to an audiobook but have been thinking about giving them a try, you might want to dive in with this one. 😉 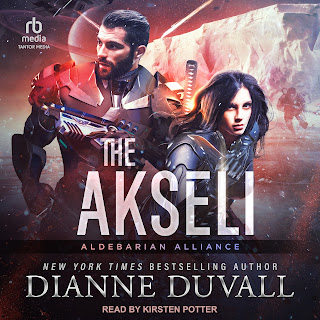 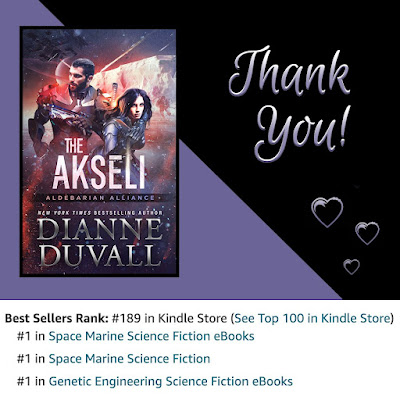 Thank you, everyone who has pre-ordered the ebook. Thanks to you, THE AKSELI catapulted up the charts and hit #1 in multiple categories on Amazon. You rock!! ❤️ 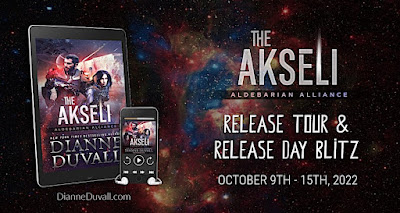 THE AKSELI will release in ebook, audiobook, paperback, and hardback on October 11, 2022. We'll be celebrating with another fun Release Tour and Release Day Blitz that will include:

and
Participation Incentive
Book influencers who participate in the tour will have the chance to be entered into a drawing to win a $25.00 Amazon eGift Card.

If you have any questions, please feel free to reach out to Crystal at crystal@dianneduvall.com

Here's another sneak peek into the pages of Simone and Janwar's story.

Janwar glanced at Simone.
A wide smile lit her features as she peered over the chunks of ice that hid them and studied the frigid surface below.
He shook his head as affection welled up within him, dampening some of his concern. “You’re enjoying this, aren’t you?”
“Absolutely,” she answered, her voice full of enthusiasm. “I have now visited an alien planet and an alien moon. I’ve become an honest-to-goodness space explorer.”
He loved this sweet, innocent side of her. If she weren’t wearing a helmet, he would smooth a hand over her hair and lean in for a kiss. “What are you thinking?” he asked, curious to know what thoughts tumbled through her sharp mind as she studied the landscape.
“Right now? Part of me is imagining you naked inside that armor.”
Surprised, he laughed. Perhaps innocent wasn’t the right word.
Read a Longer Sneak Peek
— • — •— •— •— •— •— •— •— •—
I hope those of you who pre-order THE AKSELI will enjoy Simone and Janwar's story!
Have a wonderful weekend!