This has been such an exciting week! 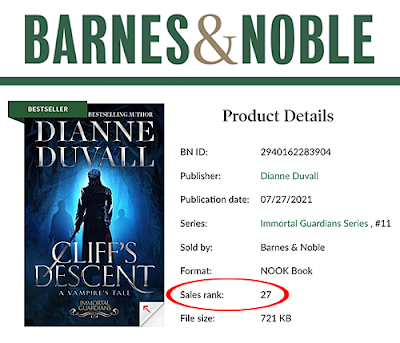 If this is your first time hearing about it, here's the blurb: 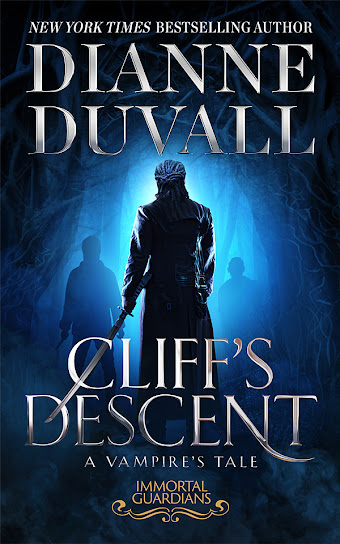 audiobook
Narrated by Kirsten Potter
Audible
paperback
Amazon
For the first time, New York Timesbestselling author Dianne Duvall brings readers a novel—set in the "fast-paced" (Publishers Weekly) and "totally addictive" (RT Book Reviews) world of the Immortal Guardians—that revolves around a vampire... one who has become a friend and trusted ally of the powerful warriors.
Every mortal who works at network headquarters knows that vampires reside below them. They were the first to surrender to the powerful Immortal Guardians who hunt them. And they did so, hoping they can be saved, that the doctors and scientists the Immortal Guardians employ can halt the progressive brain damage that robs all vampires of their sanity. Though curious, Emma never thought she would meet any of the vampires who remain under heavy guard several stories beneath her office. Then mercenaries strike, bombarding the building with heavy artillery. The vampires are freed to join the fray... and Cliff saves her life.

From that moment on, she can't stop thinking about him regardless of the restrictions placed on interactions with vampires.When Emma discovers a way to speak to Cliff at network headquarters, she becomes even more fascinated by him. He's smart, charming, and honorable to his core despite the darkness that lies ahead. And he seems to crave her company as much as she does his. Aware of the eyes that watch them, they keep their encounters innocent, limiting them to those of mere acquaintances. Nevertheless, their attraction grows and she soon falls in love with him even as the madness begins to claim him.

Cliff realizes his future is dark. As one vampire friend after another succumbs to insanity, hope that network doctors will be able to find a cure in time to keep him from meeting the same fate begins to dwindle, leaving him little to look forward to... until he meets Emma. Just speaking to her brings him a happiness and contentment he hasn't experienced since before his transformation. And when they finally find a way to be alone together, everything changes. Emma burrows her way right into his heart and quiets the voices. She sparks dreams of a future withher that strengthen his determination to beat back the madness. But as time passes, the voices grow louder and insanity begins to chip away at him until he fears it will eradicate every part of him she fell in love with.

Reviews have begun to roll in for Cliff and Emma's story. And I'm so thrilled that you're enjoying it! Here are some of the awesome things readers are saying:

"Wow! Worth the wait! This was truly a beautiful love story."

"OMGosh, what an amazing book and well worth the wait!"

"Dianne Duval not only hit the ball out of the park, she hit a grand slam."

"Outstanding! Dianne DOES NOT disappoint at all!! I DEVOURED this book. Could not put it down for even a second. It has all the feels." 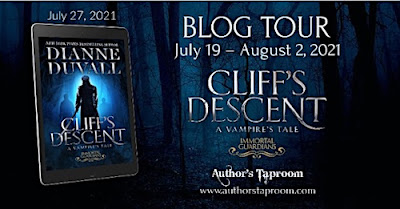 Read All About It

Lady with a Quill

Bury Oneself in a good book 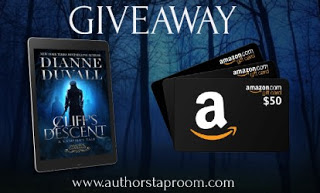 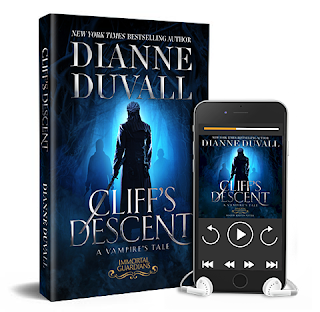 It's time once more for Favorite Quote Friday! Since you might have seen readers mention crying while reading Cliff's book, I thought I would share an excerpt of one of of the lighter moments in the story. It features Cliff and Emma (the hero and heroine) and Sadie, a friend and coworker of Emma's:
_________________________________

Cliff’s eyebrows shot up when an elderly woman stopped beside their table and beamed at him. She didn’t look a day under ninety, had a sweet smile bracketed by wrinkles, skin so pale he could see the veins at her temples, and snow-white hair pulled up into a tidy bun. The biceps left bare by her dress looked thinner than his wrist, and she seemed to weigh little more than the large clear container full of cookies that she carried.

“Hello, sweetie,” Sadie said, then swung her attention back to Cliff. “I’m so glad I caught you today, young man. Here. I baked these for you.”

Cliff’s jaw dropped when she held out the container. For a moment he could only stare in stunned disbelief. But the muscles in her bony arms began to tremble, so he hastily took the cookies. “I think you must be confusing me with someone else.”

She waved a hand and issued a pshaw sound. “I may be old, but my memory’s as sharp as a tack. You’re Vampire Cliff. Now set that down so I can hug your neck.”

He shot Emma a glance.

Her lovely lips stretching in a grin, she looked as though she were struggling not to laugh. “You’d better do as she says.”

Cliff set the container down.

Sure enough, Sadie moved closer, wrapped her arms around his neck, and gave him a hug. The scents of lavender and vanilla wafted over him. “It’s okay,” Sadie told him cheerfully. “You can hug me back. I won’t break.”

Nonplussed, he closed his arms around her and gently patted her back.

After a moment, Sadie withdrew with a smile. “As soon as I heard you’d been spotted up here in the cafeteria, I knew I had to bake you some cookies. I hope you like them. It’s a recipe passed down by my Danish grandmother.”

Maybe she didn’t understand what a vampire was.

Emma smiled at the woman. “Sadie, would you like to join us?”

Cliff watched the woman shuffle over to the serving counter, then looked at Emma.

She grinned. “I wish you could see your expression right now. It’s absolutely priceless.”

“I have no idea what’s happening.”

She laughed. “I know. She’ll explain it when she gets back.” Leaning forward, she nodded at the container. “Sadie treats everyone under the age of sixty like they’re her grandchildren. She’s ninety-three, so to her we’re all just kids.” Her eyes crinkled with mirth. “I even heard her refer to Sebastien Newcombe as that handsome boy with the glowing eyes who caused such a fuss.”

Happy Friday! Can you believe it's July already? This year is really zipping by! 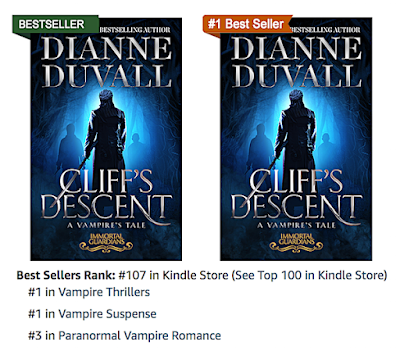 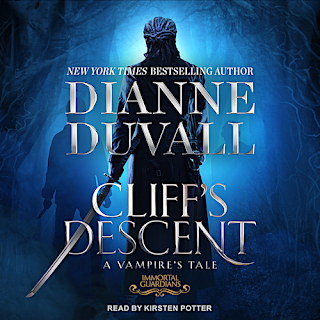 Releasing July 27th
ebook
Kindle • Kobo • Nook • Apple
AmazonAu • AmazonCA • AmazonDE • AmazonFR
audiobook
Narrated by Kirsten Potter
Audible
paperback
— Available on Release Day —
It's time once more for Favorite Quote Friday! Today I'm going to give you a first peek into the pages of Cliff's Descent: A Vampire's Tale. This snippet features Cliff and Emma, the hero and heroine:
_____________________
Cliff's gaze held hers, making Emma feel as if she was the most beautiful and most loved woman in the world.

Tonight he even sang, his deep voice joining Nat King Cole’s in professing her unforgettable as they danced beneath the moonlight. It was magical.

“I’m so in love with you,” she murmured.

Smiling, he swiveled slightly and lowered her in a gentle dip. “You’re the love of my life, Emma.”

She had never been happier than in that moment.