Happy Friday!  I hope you had a good week.  :-)  While my friends in the north were grumbling over having to shovel more snow, I had to call the AC repairman out because it's been so warm here I've been running my AC all winter.  Ugh!  I really miss having four seasons.

Thank you so much, everyone who joined me in the Romance Madness Hop!  It was fun, wasn't it?  :-)  The winner of a signed Immortal Guardians book of her choice + swag is . . .

It's time once more for Favorite Quote Friday!  For today's selection, I thought I would focus again on Phantom Shadows, Immortal Guardians Book 3, since it's my latest release, and give you another quote from Bastien, the hero:

"If you're wise, you'll put your wee willy away now."

I hope you'll have a fantastic weekend!  And, if you're getting too much snow, send some of it my way!

Posted by Dianne Duvall at 10:49 PM No comments: 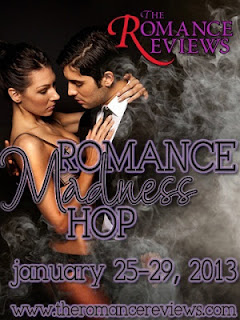 Welcome to the Romance Madness Hop!  I'm thrilled to be one of the participants because this hop, hosted by The Romance Reviews, is all about the romance.  I have been an avid reader for as long as I can remember, and romance has always been my genre of choice.  I love everything about it.  That first glance the hero and heroine share, accompanied by the sudden racing of their hearts.  Their first words.  First shared laugh, particularly if that laugh is elicited from one who doesn't do so often.  First touch.  And, of course, those happily ever afters.  :-)

While I read romances of just about every subgenre, paranormal romance is my favorite.  That's why I chose to explore it when I dove into writing myself.  So, for my prize, I'm giving away a signed copy of the winner's choice of one of the first three Immortal Guardians books + Immortal Guardians swag. 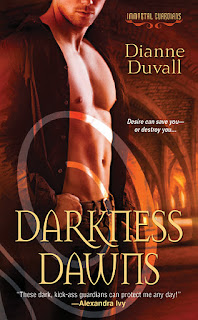 Marcus Grayden has been an immortal protector of humanity for eight hundred years, and at the moment he's not interested in backup.  From the moment Ami arrives in his life, he can't deny that she's strong, smart, and extremely skilled at watching his back.  But she's also destroying his protective solitude and stirring desires he can't bear to awaken.  After all, whatever her secrets -- how can she defeat death itself? 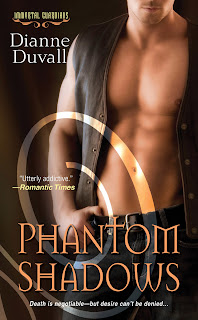 "With this excellent entry, rising star Duvall is fast proving to be a major player in paranormal romance!"
4.5 stars, RT Book Reviews

Dr. Melanie Lipton is no stranger to the supernatural.  She knows immortals better than they know themselves, right down to their stubborn little genes.  So although a handsome rogue immortal seems suspicious to her colleagues, Sebastien Newcombe intrigues Melanie.  His history is checkered, his scars are impressive, and his ideas are daring.  But it's not his ideas that have Melanie fighting off surges of desire . . .

Bastien is used to being the bad guy.  In fact, he can't remember the last time he had an ally he could trust.  But Melanie is different - and under her calm, professional exterior he senses a passion beyond anything in his centuries of experience.  Giving in to temptation is out of the question - he can't put her in danger.  But she isn't asking him . . .

The Romance Madness Hop runs from January 25th 12:00am EST through January 29th 11:59pm EST and is hosted by The Romance Reviews.


Mandatory entry
Leave a comment below during the 5-day hop and let me know why you love romance.  :-)  Also mention extra entries.  If you don't include your email address in your comment (feel free to write it out), you will have to check back here to see if you've won.  I'll announce it by February 1st.


Selecting a Winner
I will use random.org to choose a winner after verifying all entries  and will announce it here by February 1st.  If the winner's email address is included in her comment, I will email her, too.  The winner will have one week to contact me.

There are many prizes up for grabs by other authors and bloggers.  Click on the hop button below to go to the next post and sign in to The Romance Reviews to earn entries for their Hop prizes, including 5 ($10) Amazon gift certificates.

Good luck!  And have a wonderful weekend!

Happy Friday!  I hope you all had a good week! 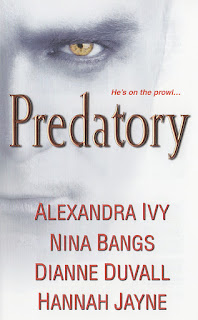 Predatory is now available for pre-order on Kindle!  Woohoo!  Here's the back cover blurb:


Four of today's most exciting paranormal authors take readers into the thrilling realm of vampires, immortals, and other supernatural beings with a thirst for illicit desire...

Out Of Control by Alexandra Ivy

Ph.D student Angela Locke has a crush on her sexy professor, Dr. Nikolo Bartrev. When she learns he's actually a Sentinel with extraordinary powers, she joins forces with him to catch a psychopath. But soon, their hottest pursuit is of each other...

Ties That Bind by Nina Bangs

Cassie Tyler agrees to sub for her friend at the funeral home where she works. But she gets more than she bargained for when a group of men attack her and a vampire comes to her rescue. . .

In Still Darkness by Dianne Duvall

Immortal Richart d'Alençon can't forget the woman who rewarded him with a sensuous kiss after he saved her from a trio of vampires. While Richart knows that loving a human can only bring trouble, the taste of forbidden lust is too great to resist. . .

When vampire fashionista Nina LaShay's design contest rival is found dead, she's the prime suspect. Sexy photographer Pike is number two. He's the kind of man who makes Nina salivate. But will she have to reveal herself to have him--and to save them both? Or does Pike have a secret of his own?

It's time once more for Favorite Quote Friday!  I thought this week I would offer a narrative quote from Phantom Shadows, Immortal Guardians Book 3, that features Bastien and Melanie, the hero and heroine:

Neither she nor Bastien spoke for a long moment as his gaze roved her like a pair of hands.

Dianne
Posted by Dianne Duvall at 11:06 PM No comments: 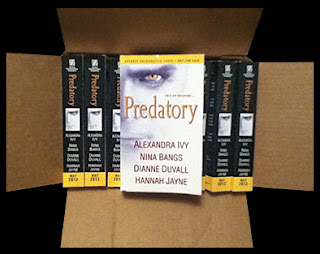 Woohoo!  My Predatory ARCs came!  I'm so excited!  I hope you'll like "In Still Darkness", my story in it.  I thought it would be fun to see what would happen if Richart tried to conduct a conventional courtship, since none of the other immortals have done so.  Spending one's nights hunting and destroying insane vampires doesn't give one much opportunity to date, so he's a little rusty.  ;-)

It's time once more for Favorite Quote Friday!  For today's selection, I thought I would rifle through the pages of Phantom Shadows, Immortal Guardians Book 3, and offer a quote from Bastien, the hero:


"If I have to hunt you down, there won't be any talking when I find you. We clear?"

Have a fantastic weekend!

Dianne
Posted by Dianne Duvall at 3:31 AM 3 comments:

Happy Friday!  I hope you had a great week.  For those who are already back in school, I hope your semester started off well!  For those on vacation, I hope you're enjoying it!  :-)

I was very excited to learn that both Darkness Dawns and Phantom Shadows made Buffy Kennedy's Top 5 Favorite Paranormal Romance & Urban Fantasy Books of 2012 at Grave Tells!  Woohoo! 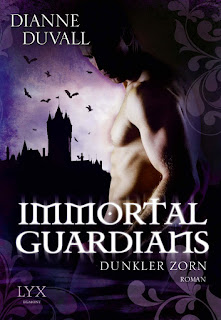 Even more good news:  Here's the cover of the German translation of Night Reigns, which will be released in April 2013.  :-)

It's time once more for Favorite Quote Friday!  I think I've mentioned this before, but I've really come to like Sheldon, Richart's rather green Second . . . which is why I often have him conduct the interviews when I do character interviews for my blog tours.  :-)  Since Bastien and Richart are thrown together a lot in Phantom Shadows, Sheldon plays a larger role than he has in the past.  So I thought I would offer another Sheldon quote from Phantom Shadows, Immortal Guardians Book 3:

Dude, the next time you invite Satan to dinner, give me a little warning first.

You'll see more of him in Predatory

Happy Friday!  And Happy New Year!  I hope your first week in 2013 has been a good one.  Mine has been very productive.

I finished going over the proofs for In Still Darkness, my novella in the Predatory

anthology.  Yay!  It tells Richart's story and will be released on May 7, 2013.  I also finished Darkness Rises

, Immortal Guardians Book 4, and turned it in to my editor.  Woohoo!  It tells Étienne's story and will be released on October 1, 2013.  I'm so excited!  I hope you'll like them!

It's time once more for Favorite Quote Friday!  If you're new to my series, the leader of the Immortal Guardians is a powerful, enigmatic figure named Seth, who has lived thousands of years.  Seth usually has his hands full, watching over the immortals and rendering aid where needed, and has become a real favorite of readers.  (Mine, too.)  I think his story is more requested than anyone else's.  So, for today's selection, I thought I would choose a Seth quote, taken from Phantom Shadows:

He gave the damage to the other part of the room a quick once over and sighed.  "I'm not even going to ask."

I hope you'll have a nice weekend!  And may 2013 be a happy, healthy, and prosperous one for you!

Posted by Dianne Duvall at 5:04 AM No comments: