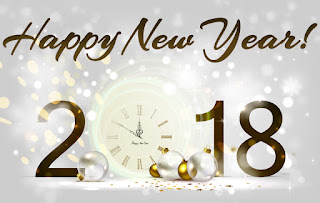 Happy New Year!! I hope you've all been enjoying the holidays. I haven't posted in quite some time because I was sick for a while and also have been trying to carve out some more time to be with my family. 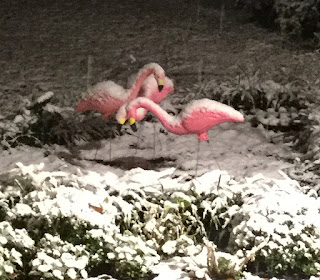 We actually got several hours of snow here one night, the first we've seen in years. So cool! I was sick with the flu and it was the middle of the night, but I went out and played in it anyway. 😀 We just had another cold snap that I'm hoping has killed off the mosquitoes and whatever keeps aggravating my allergies. Unfortunately, it also killed off some of my plants, so I'll have to find time to plant more soon.
— • — • — • — • — • — • — • — • — • — • —
I noticed the lovely holiday lights around town are beginning to come down, so I thought I'd share some pics of the lights I saw while I was out and about. 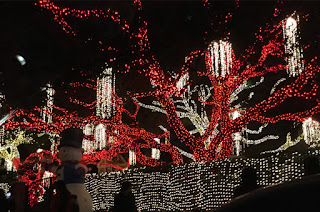 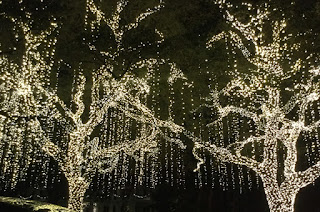 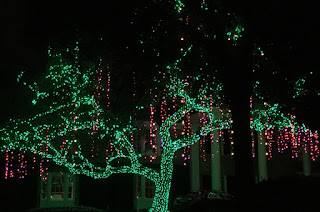 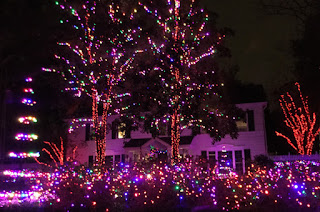 I think the last two were my favorites. They were so pretty. I look forward to seeing the lights every year and always end up wishing they'd stay up a little longer. 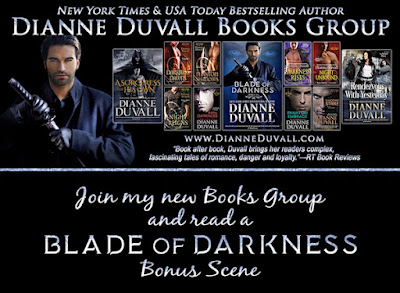 I've started the new year by launching a new group on Facebook—Dianne Duvall Books Group. Facebook has changed its algorithms yet again, so now less than 1% of people who have Liked my page are shown my posts. I've been hearing from a lot of frustrated readers who haven't seen my posts in so long that they didn't know I had released another Immortal Guardians book (Blade of Darkness). Facebook doesn't seem to limit the reach of Groups, so I started the new group to give us all a place to chat and bring you the latest news. I'm already enjoying it. It's been a lot of fun, so I hope you'll join if you like The Gifted Ones and/or my Immortal Guardians series.

* * * All members of the group can read a Bonus Scene from Blade of Darkness that didn't appear in the published book. * * * 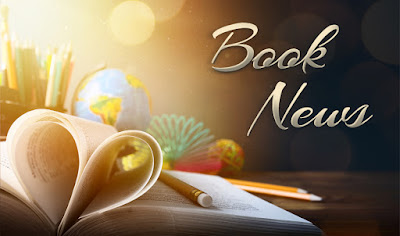 If you're a member of my Street Team or have joined the Dianne Duvall Books Group, then you've already heard this. But for those who haven't, I have book news for you:

When Blade of Darkness released, everyone asked me whose book would be next. I said Seth's book will be the next full-length novel released in the Immortal Guardians series, but that there might be a novella between now and then. Well, in case you haven’t heard yet… there absolutely WILL be a novella first. Sort of. 😃

A story that has been rambling around the outskirts of my imagination for a while now suddenly leapt forward when I released Aidan's story, grabbed hold of me and wouldn't let go. I'm very excited about it. But I'm going to keep you in suspense as to who the hero and heroine are. I want you to find out when I release the blurb and cover. 😉 And since I'm self-publishing now, I no longer have to adhere to a prescribed word count. I was supposed to keep the first two under 25k words (100 pages). This one, however, looks like it’s going to come in at around 250 pages, which technically is a novel, not a novella. Hence, the “sort of” above. LOL. It’s still going to be significantly shorter than my other novels, which tend to come in at around 450-500 manuscript pages. So I still think of it as a novella.  I'm so excited!! 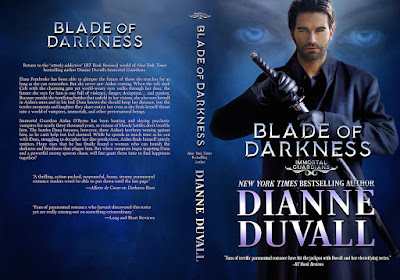 It's time once more for Favorite Quote Friday—the 1st of 2018! Today I thought I would share a brief excerpt of Blade of Darkness with you. Aidan (the hero) is a powerful Celtic immortal and Dana (the heroine) is a mortal psychic.

Dana picked up her fork and speared some salad. “So.” Tucking the crunchy veggies in her mouth, she chewed and swallowed. “You’re smitten with a psychic, are you?”

Relief smoothed the lines in Aidan’s brow. His lips tilted up. “Very much so.”

“Because of the visions?” she asked, trying not to blush.

His smile grew as he picked up his own fork. “I was smitten before the visions. The visions just gave me hope that you might one day be smitten, too.”

And damned if her heart didn’t give a little jump in her chest. “Don’t read my thoughts!”

He chuckled. “I won’t. I’m afraid if I do, I’ll find you trying to think of a diplomatic way to end our date early.”

Better that than him finding her mentally reviewing the visions of them making love.

“You’re blushing,” he said with a wince. “Did I guess right? Are you wanting to end our date?”

“No. I was just…” She shook her head with a smile. “Having those visions about you was already weird. Your knowing about them just makes it…”

“Even weirder?” he suggested.

“No. Not even about the men I slept with.”

He winked. “Perhaps they simply weren’t very talented in bed.”

I hope you and yours will have a very happy, healthy and prosperous new year!