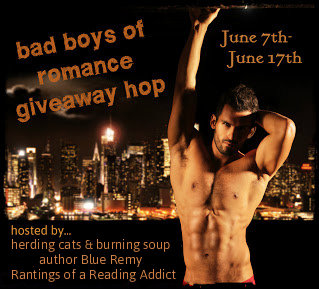 We all love them — those "bad boys" of romance.  And now we're celebrating them and all of their naughty deliciousness.  :-)

The first bad boy of romance who came to mind for me when I signed up for the hop was Sebastien Newcombe, the hero of Phantom Shadows, Book 3 in my Immortal Guardians series.  He's handsome enough to make hearts flutter.  He's dark and brooding.  And, when my series began, Bastien was the villain.  He even raised an army of psychotic vampires and waged war with the Immortal Guardians (powerful warriors who seek to protect humanity by hunting and destroying vampires).  His actions earned him the hatred of just about everyone — immortals, vampires, and humans alike — except for Dr. Melanie Lipton, who saw in Bastien what the others couldn’t.

Then his world turned upside down and Bastien now must fight alongside the immortals.  To say his entrance into their ranks hasn't gone smoothly would be a colossal understatement.  Neither the immortals, nor the humans who aid them, are willing to let him forget his dark past.  But much is at stake, and Bastien has never backed down from a challenge.  When he refuses to do so now, Melanie raises both her voice and her blades in his defense.  Can her tenderness heal his many scars?  Will the protective barriers he has constructed around his heart crumble beneath the onslaught of her teasing and kindness?   Find out in Phantom Shadows.  :-) 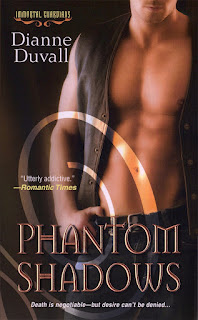 Top Pick
"With a deeply emotional love story, two beautiful, complex main characters and a pulse-pounding adventure that won't let up, this book was haunting and addictive and I loved every page."
The Romance Reviews

"With this excellent entry, rising star Duvall is fast proving to be a major player in paranormal romance!"
4.5 stars, RT Book Reviews

Dr. Melanie Lipton is no stranger to the supernatural.  She knows immortals better than they know themselves, right down to their stubborn little genes.  So although a handsome rogue immortal seems suspicious to her colleagues, Sebastien Newcombe intrigues Melanie.  His history is checkered, his scars are impressive, and his ideas are daring.  But it's not his ideas that have Melanie fighting off surges of desire . . .

Bastien is used to being the bad guy.  In fact, he can't remember the last time he had an ally he could trust.  But Melanie is different - and under her calm, professional exterior he senses a passion beyond anything in his centuries of experience.  Giving in to temptation is out of the question - he can't put her in danger.  But she isn't asking him . . . 
A Kindle and lots of awesome ebooks, including a kindle copy of Darkness Dawns, the first book in my Immortal Guardians series.  :-)!

The Bad Boys of Romance Giveaway Hop runs from June 7th 12:00am EST through June 17th 11:59pm EST.  My giveaway is international.


Mandatory entry for my prize
Leave a comment below during the hop, include your email address, and let me know who your favorite bad boy of romance is.  :-)  Also mention extra entries.


Extra entries for my prize
For extra entries you may do any or all of the following, but be sure to mention them in your comment.


Selecting a Winner for my prize
I will use random.org to choose my prize winner after verifying all entries and will announce it here by June 21st.  If the winner's email address is included in her comment, I will email her or him, too.  The winner will have one week to contact me.


For Grand Prize entries
(See the rafflecopter below)

Good luck!  And have fun!

Posted by Dianne Duvall at 1:23 AM